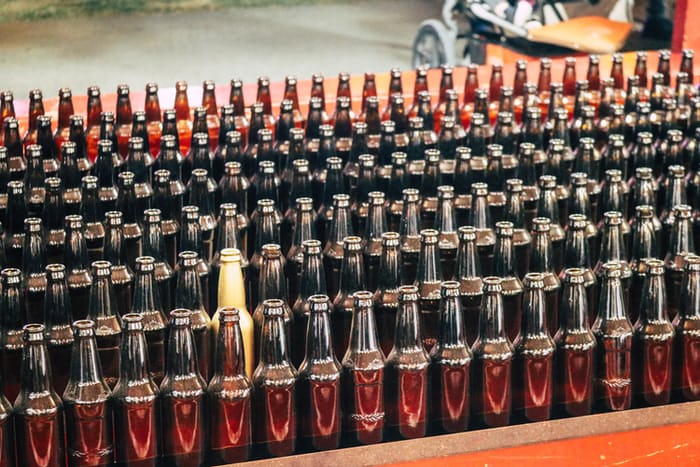 An outlier may be due to the variability inherent in the observed phenomenon. For example, it is often the case that there are outliers when collecting data on salaries, as some people make much more money than the rest. Outliers can also arise due to an experimental, measurement or encoding error. For instance, a human weighting 786 kg (1733 pounds) is clearly an error when encoding the weight of the subject. Her or his weight is most probably 78.6 kg (173 pounds) or 7.86 kg (17 pounds) depending on whether weights of adults or babies have been measured.

For this reason, it sometimes makes sense to formally distinguish two classes of outliers: (i) extreme values and (ii) mistakes. Extreme values are statistically and philosophically more interesting, because they are possible but unlikely responses. (Thanks Felix Kluxen for the valuable suggestion.)

In this article, I present several approaches to detect outliers in R, from simple techniques such as descriptive statistics (including minimum, maximum, histogram, boxplot and percentiles) to more formal techniques such as the Hampel filter, the Grubbs, the Dixon and the Rosner tests for outliers.

Although there is no strict or unique rule whether outliers should be removed or not from the dataset before doing statistical analyses, it is quite common to, at least, remove or impute outliers that are due to an experimental or measurement error (like the weight of 786 kg (1733 pounds) for a human). Some statistical tests require the absence of outliers in order to draw sound conclusions, but removing outliers is not recommended in all cases and must be done with caution.

This article will not tell you whether you should remove outliers or not (nor if you should impute them with the median, mean, mode or any other value), but it will help you to detect them in order to, as a first step, verify them. After their verification, it is then your choice to exclude or include them for your analyses (and this usually requires a thoughtful reflection on the researcher’s side). Removing or keeping outliers mostly depend on three factors:

The dataset mpg from the {ggplot2} package will be used to illustrate the different approaches of outliers detection in R, and in particular we will focus on the variable hwy (highway miles per gallon).

The first step to detect outliers in R is to start with some descriptive statistics, and in particular with the minimum and maximum.

In R, this can easily be done with the summary() function:

where the minimum and maximum are respectively the first and last values in the output above. Alternatively, they can also be computed with the min() and max() functions:

Some clear encoding mistake like a weight of 786 kg (1733 pounds) for a human will already be easily detected by this very simple technique.

Another basic way to detect outliers is to draw a histogram of the data.

Using R base (with the number of bins corresponding to the square root of the number of observations in order to have more bins than the default option): 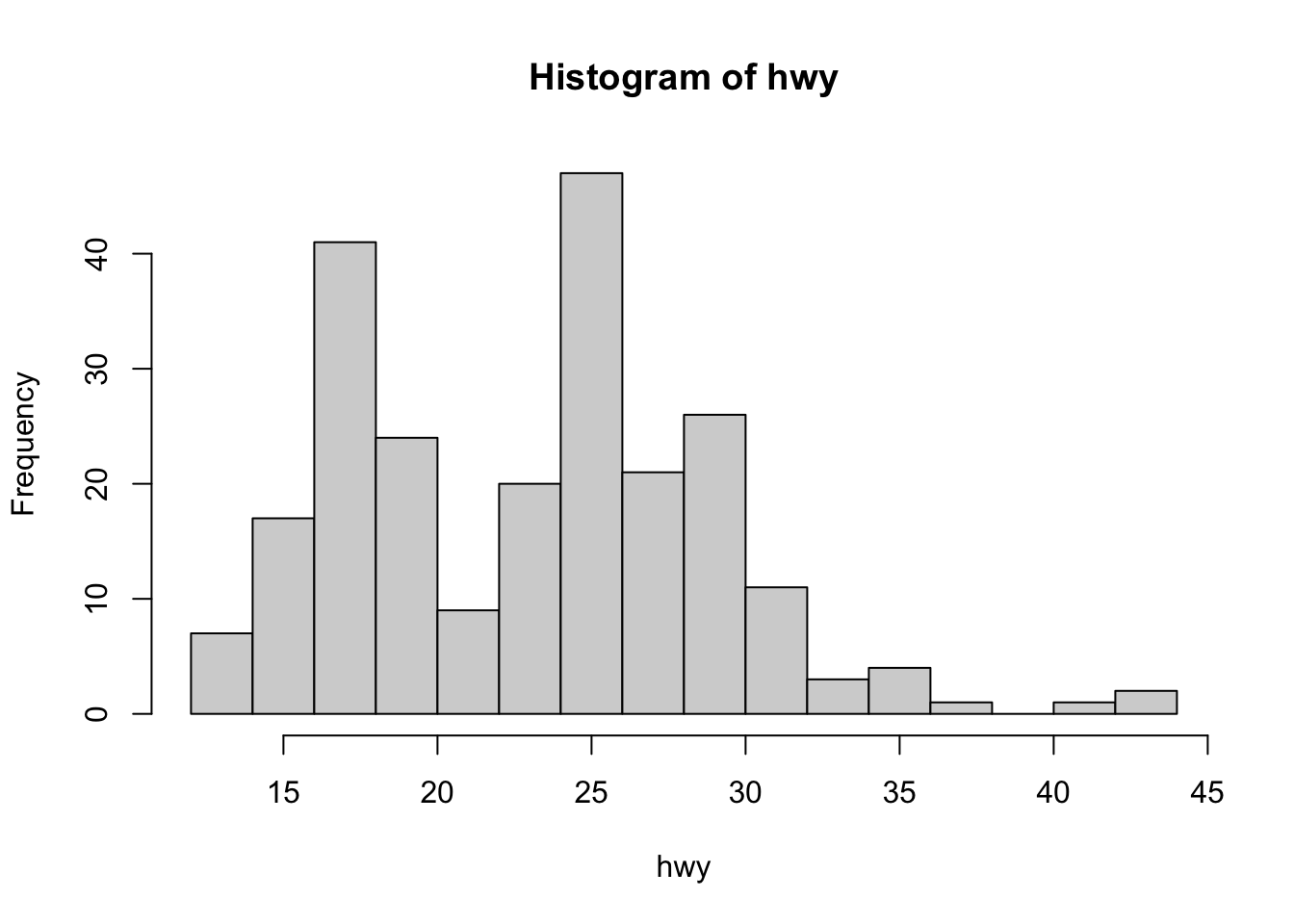 or using ggplot2 (learn how to create plots with this package via the esquisse addin or via this tutorial): 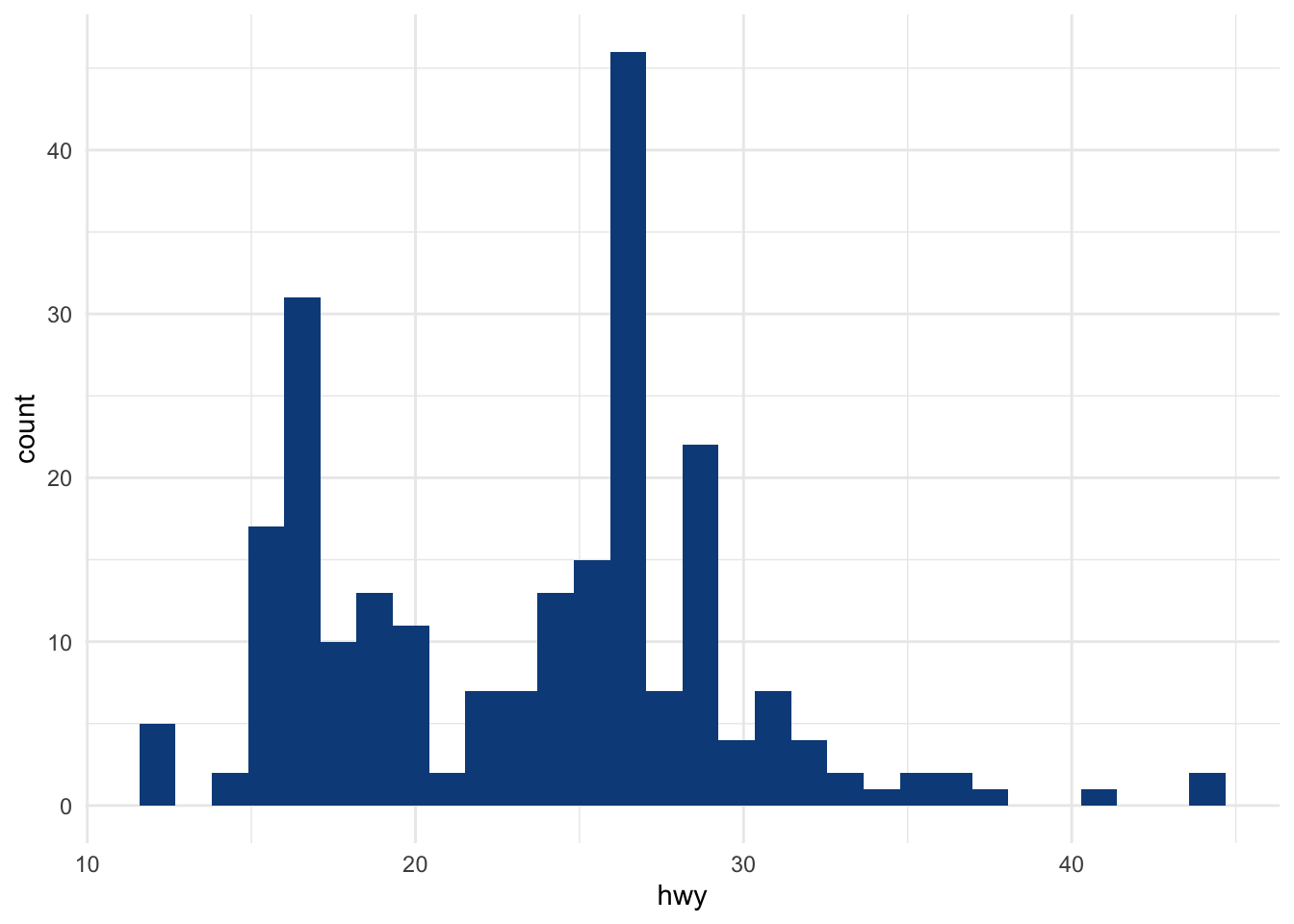 From the histogram, there seems to be a couple of observations higher than all other observations (see the bar on the right side of the plot).

In addition to histograms, boxplots are also useful to detect potential outliers. 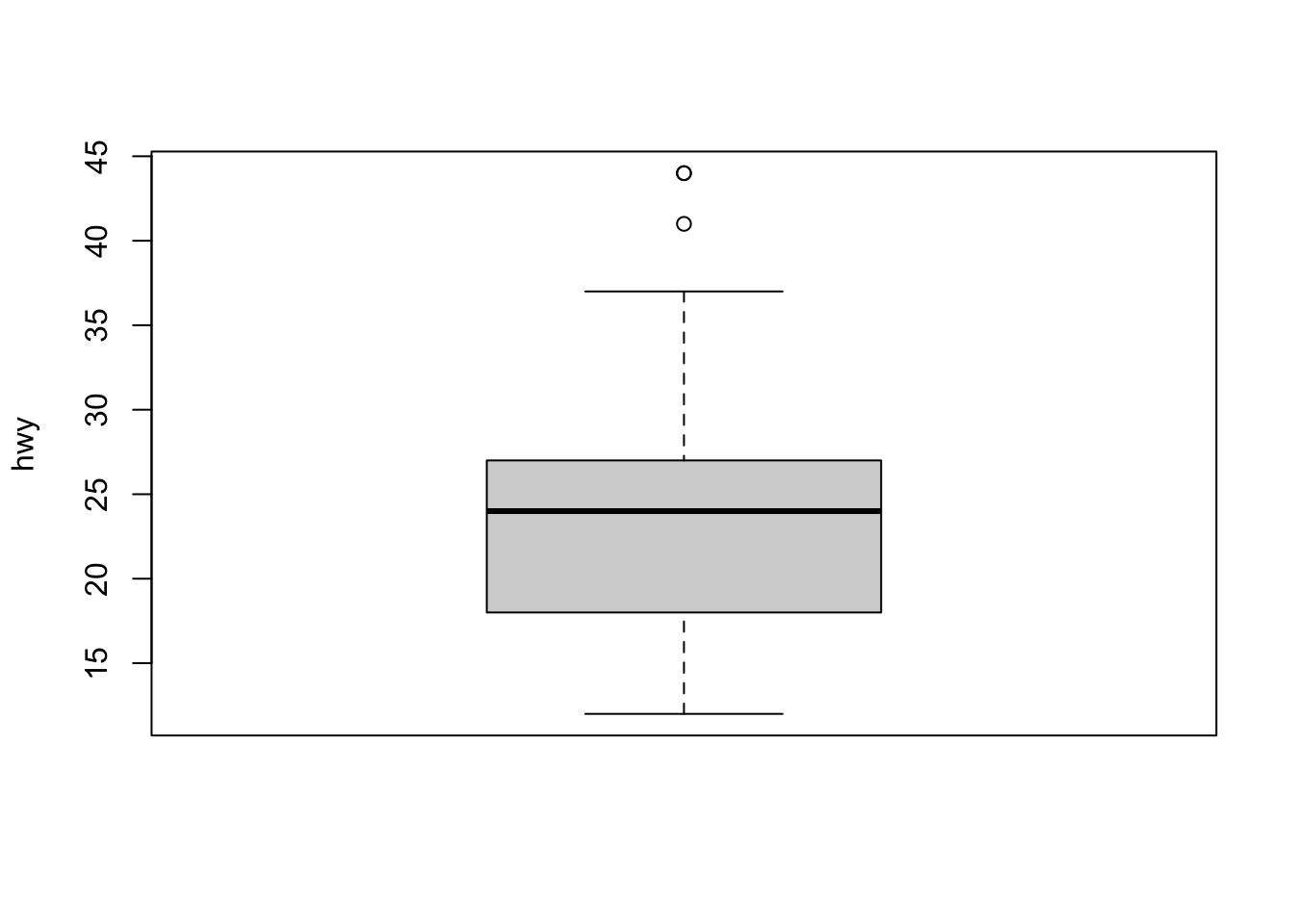 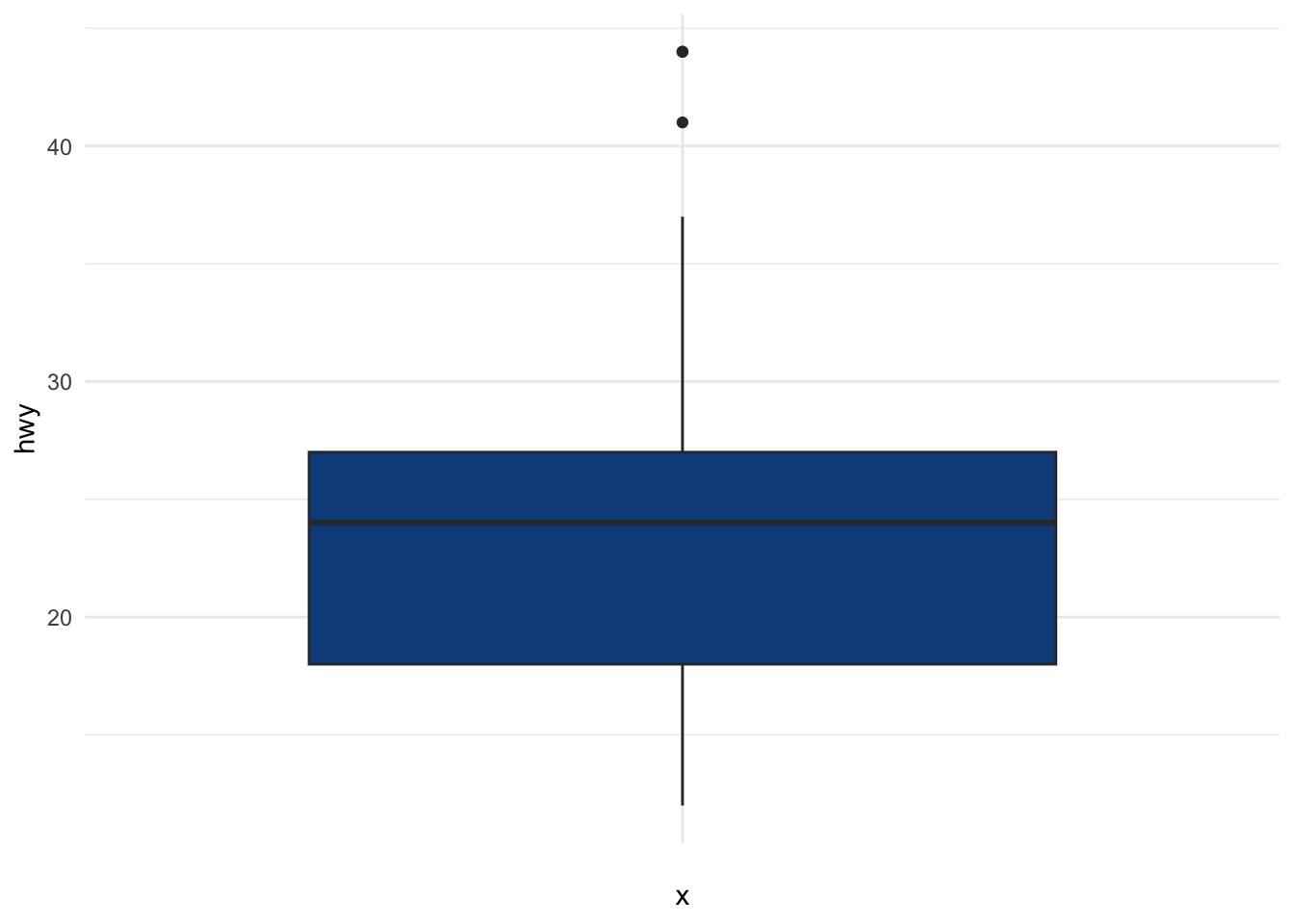 A boxplot helps to visualize a quantitative variable by displaying five common location summary (minimum, median, first and third quartiles and maximum) and any observation that was classified as a suspected outlier using the interquartile range (IQR) criterion. The IQR criterion means that all observations above \(q_{0.75} + 1.5 \cdot IQR\) or below \(q_{0.25} - 1.5 \cdot IQR\) (where \(q_{0.25}\) and \(q_{0.75}\) correspond to first and third quartile respectively, and IQR is the difference between the third and first quartile) are considered as potential outliers by R. In other words, all observations outside of the following interval will be considered as potential outliers:

Remember that it is not because an observation is considered as a potential outlier by the IQR criterion that you should remove it. Removing or keeping an outlier depends on (i) the context of your analysis, (ii) whether the tests you are going to perform on the dataset are robust to outliers or not, and (iii) how far is the outlier from other observations.

It is also possible to extract the values of the potential outliers based on the IQR criterion thanks to the boxplot.stats()$out function:

Thanks to the which() function it is possible to extract the row number corresponding to these outliers:

With this information you can now easily go back to the specific rows in the dataset to verify them, or print all variables for these outliers:

It is also possible to print the values of the outliers directly on the boxplot with the mtext() function: 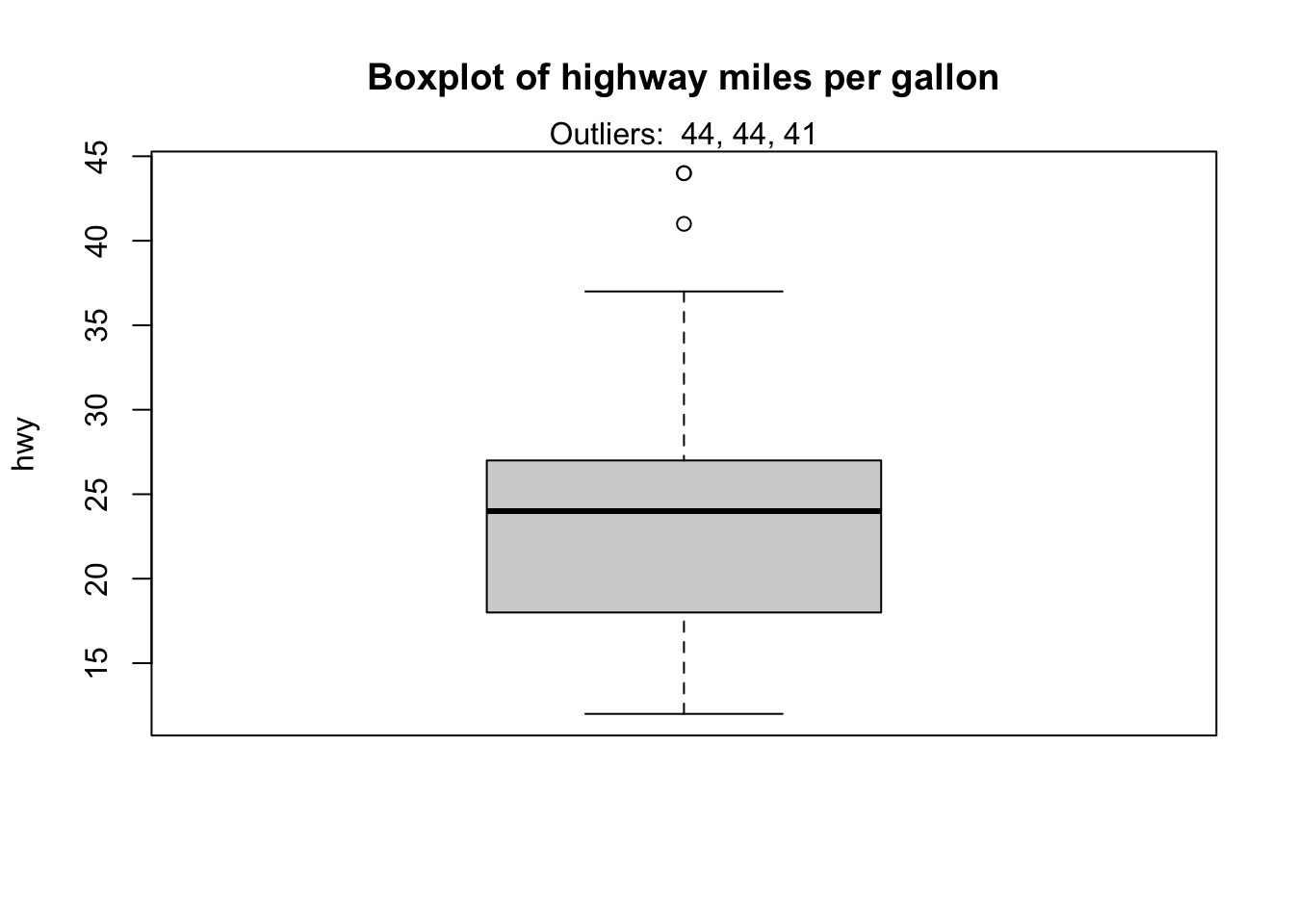 According to this method, all observations below 14 and above 35.175 will be considered as potential outliers. The row numbers of the observations outside of the interval can then be extracted with the which() function:

Then their values of highway miles per gallon can be printed:

Alternatively, all variables for these outliers can be printed:

Setting the percentiles to 1 and 99 gives the same potential outliers as with the IQR criterion.

Another method, known as Hampel filter, consists of considering as outliers the values outside the interval (\(I\)) formed by the median, plus or minus 3 median absolute deviations (\(MAD\)):1

For this method we first set the interval limits thanks to the median() and mad() functions:

According to this method, all observations below 1.761 and above 46.239 will be considered as potential outliers. The row numbers of the observations outside of the interval can then be extracted with the which() function:

According to the Hampel filter, there is no potential outlier for the hwy variable.

In this section, we present 3 more formal techniques to detect outliers:

These 3 statistical tests are part of more formal techniques of outliers detection as they all involve the computation of a test statistic that is compared to tabulated critical values (that are based on the sample size and the desired confidence level).

The Grubbs test allows to detect whether the highest or lowest value in a dataset is an outlier.

The Grubbs test detects one outlier at a time (highest or lowest value), so the null and alternative hypotheses are as follows:

if we want to test the highest value, or:

if we want to test the lowest value.

As for any statistical test, if the p-value is less than the chosen significance threshold (generally \(\alpha = 0.05\)) then the null hypothesis is rejected and we will conclude that the lowest/highest value is an outlier. On the contrary, if the p-value is greater or equal than the significance level, the null hypothesis is not rejected, and we will conclude that, based on the data, we do not reject the hypothesis that the lowest/highest value is not an outlier.

To perform the Grubbs test in R, we use the grubbs.test() function from the {outliers} package:

The p-value is 0.056. At the 5% significance level, we do not reject the hypothesis that the highest value 44 is not an outlier.

By default, the test is performed on the highest value (as shown in the R output: alternative hypothesis: highest value 44 is an outlier). If you want to do the test for the lowest value, simply add the argument opposite = TRUE in the grubbs.test() function:

The R output indicates that the test is now performed on the lowest value (see alternative hypothesis: lowest value 12 is an outlier).

The p-value is 1. At the 5% significance level, we do not reject the hypothesis that the lowest value 12 is not an outlier.

For the sake of illustration, we will now replace an observation with a more extreme value and perform the Grubbs test on this new dataset. Let’s replace the \(34^{th}\) row with a value of 212:

And we now apply the Grubbs test to test whether the highest value is an outlier:

Similar to the Grubbs test, Dixon test is used to test whether a single low or high value is an outlier. So if more than one outliers is suspected, the test has to be performed on these suspected outliers individually.

To perform the Dixon’s test in R, we use the dixon.test() function from the {outliers} package. However, we restrict our dataset to the 20 first observations as the Dixon test can only be done on small sample size (R will throw an error and accepts only dataset of 3 to 30 observations):

To test for the highest value, simply add the opposite = TRUE argument to the dixon.test() function:

It is a good practice to always check the results of the statistical test for outliers against the boxplot to make sure we tested all potential outliers: 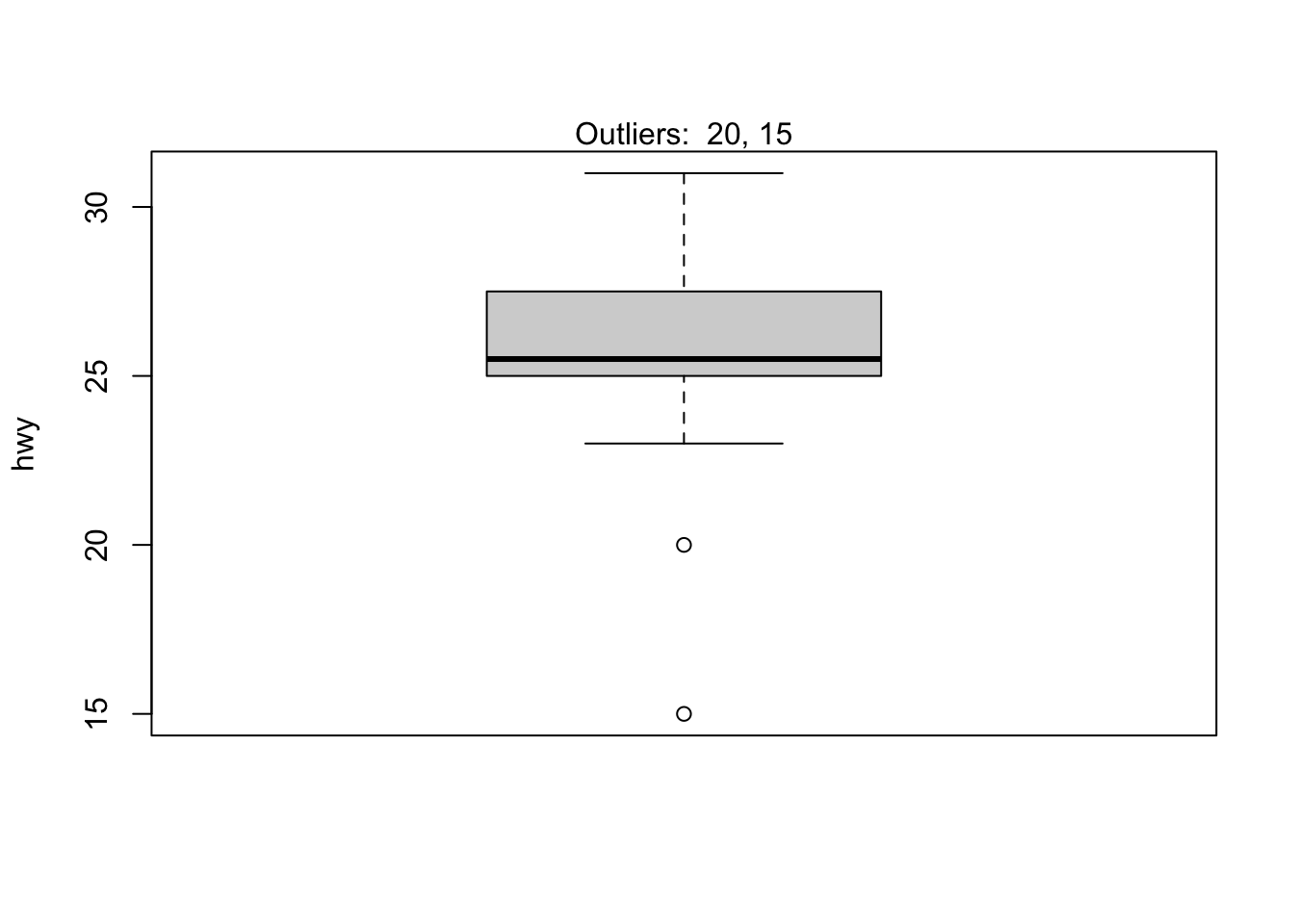 Rosner’s test for outliers has the advantages that:

Unlike Dixon test, note that Rosner test is most appropriate when the sample size is large (\(n \ge 20\)). We therefore use again the initial dataset dat, which includes 234 observations.

For this example, we set the number of suspected outliers to be equal to 3, as suggested by the number of potential outliers outlined in the boxplot at the beginning of the article.2

The interesting results are provided in the $all.stats table:

Based on the Rosner test, we see that there is only one outlier (see the Outlier column), and that it is the observation 34 (see Obs.Num) with a value of 212 (see Value).

You will find many other methods to detect outliers: 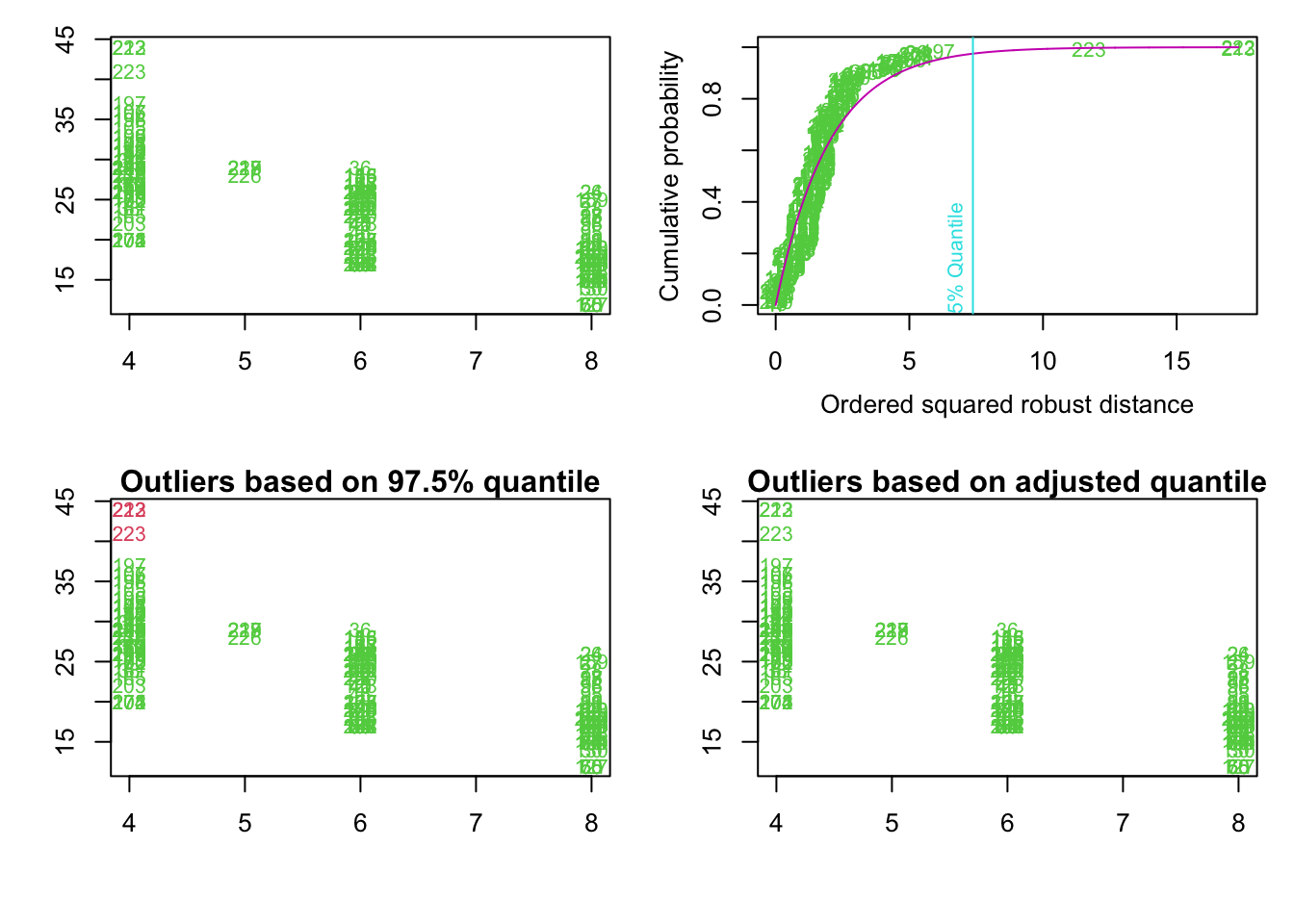 Thanks for reading. I hope this article helped you to detect outliers in R via several descriptive statistics (including minimum, maximum, histogram, boxplot and percentiles) or thanks to more formal techniques of outliers detection (including Hampel filter, Grubbs, Dixon and Rosner test). It is now your turn to verify them, and if they are correct, decide how to treat them (i.e., keeping, removing or imputing them) before conducting your analyses.