Do my data follow a normal distribution? A note on the most widely used distribution and how to test for normality in R 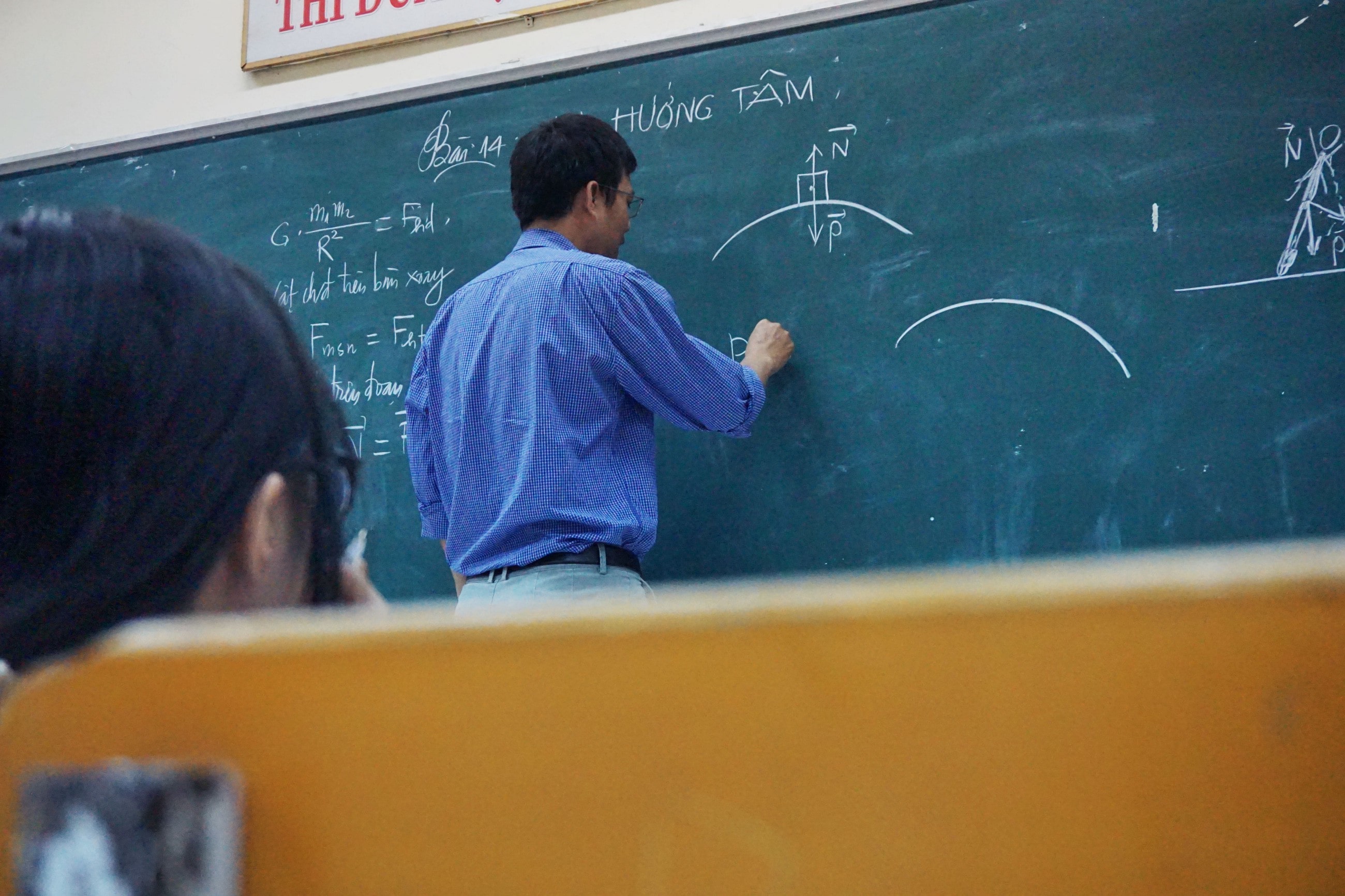 What is a normal distribution?

The normal distribution is a mount-shaped, unimodal and symmetric distribution where most measurements gather around the mean. Moreover, the further a measure deviates from the mean, the lower the probability of occurring. In this sense, for a given variable, it is common to find values close to the mean, but less and less likely to find values as we move away from the mean. Last but not least, since the normal distribution is symmetric around its mean, extreme values in both tails of the distribution are equivalently unlikely. For instance, given that adult height follows a normal distribution, most adults are close to the average height and extremely short adults occur as infrequently as extremely tall adults.

In this article, the focus is on understanding the normal distribution, the associated empirical rule, its parameters and how to compute \(Z\)-scores to find probabilities under the curve (illustrated with examples). As it is a requirement in some statistical tests and hypothesis tests, we also show 4 complementary methods to test the normality assumption in R.

Data possessing an approximately normal distribution have a definite variation, as expressed by the following empirical rule:

where \(\mu\) and \(\sigma\) correspond to the population mean and population standard deviation, respectively.

Now suppose that a single university student is randomly selected from those who took the exam. What is the probability that her score will be between 49 and 85? Based on the empirical rule, we find that 0.95 is a reasonable answer to this probability question.

For instance, see how the shapes of the normal distributions vary when the two parameters change: 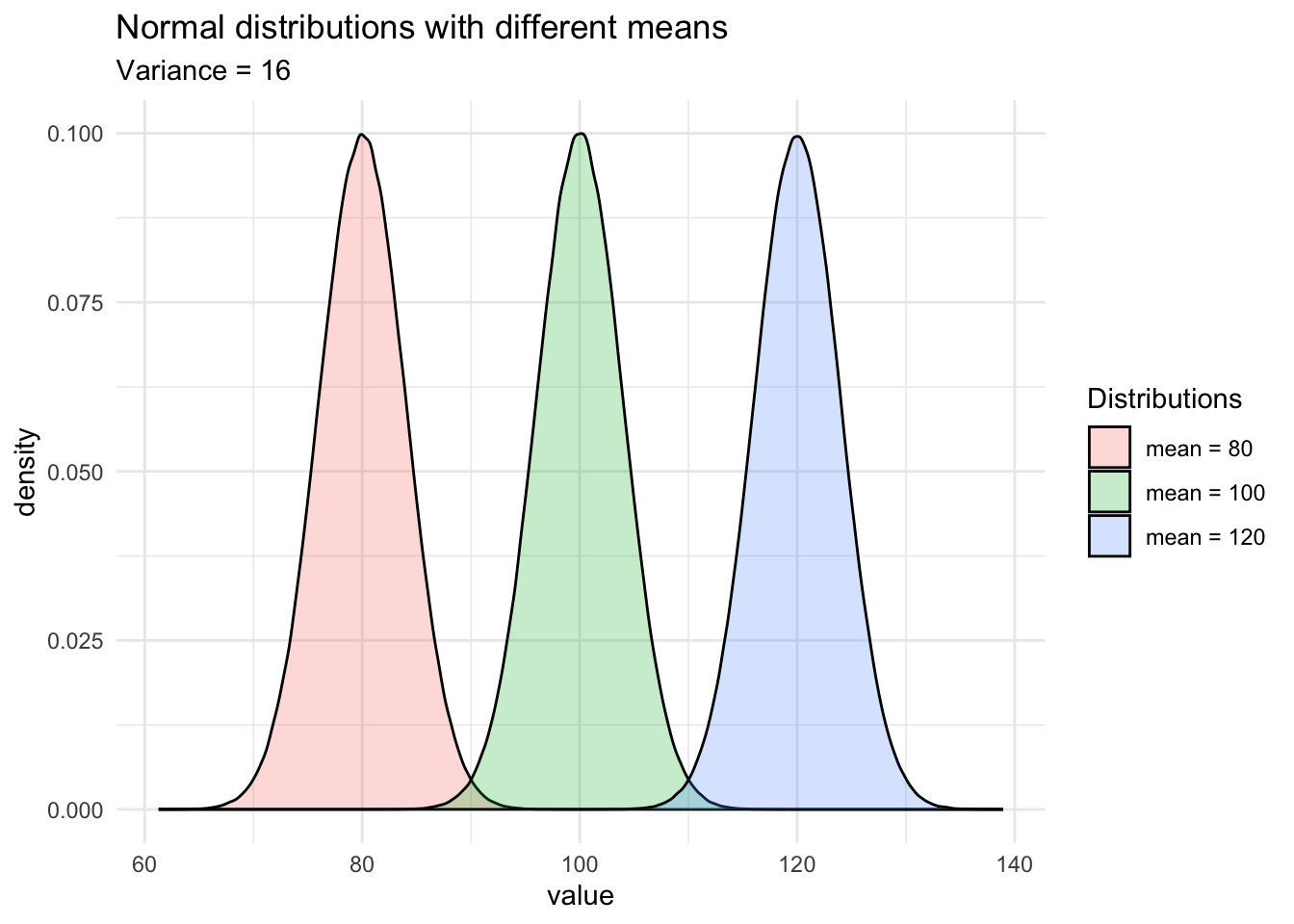 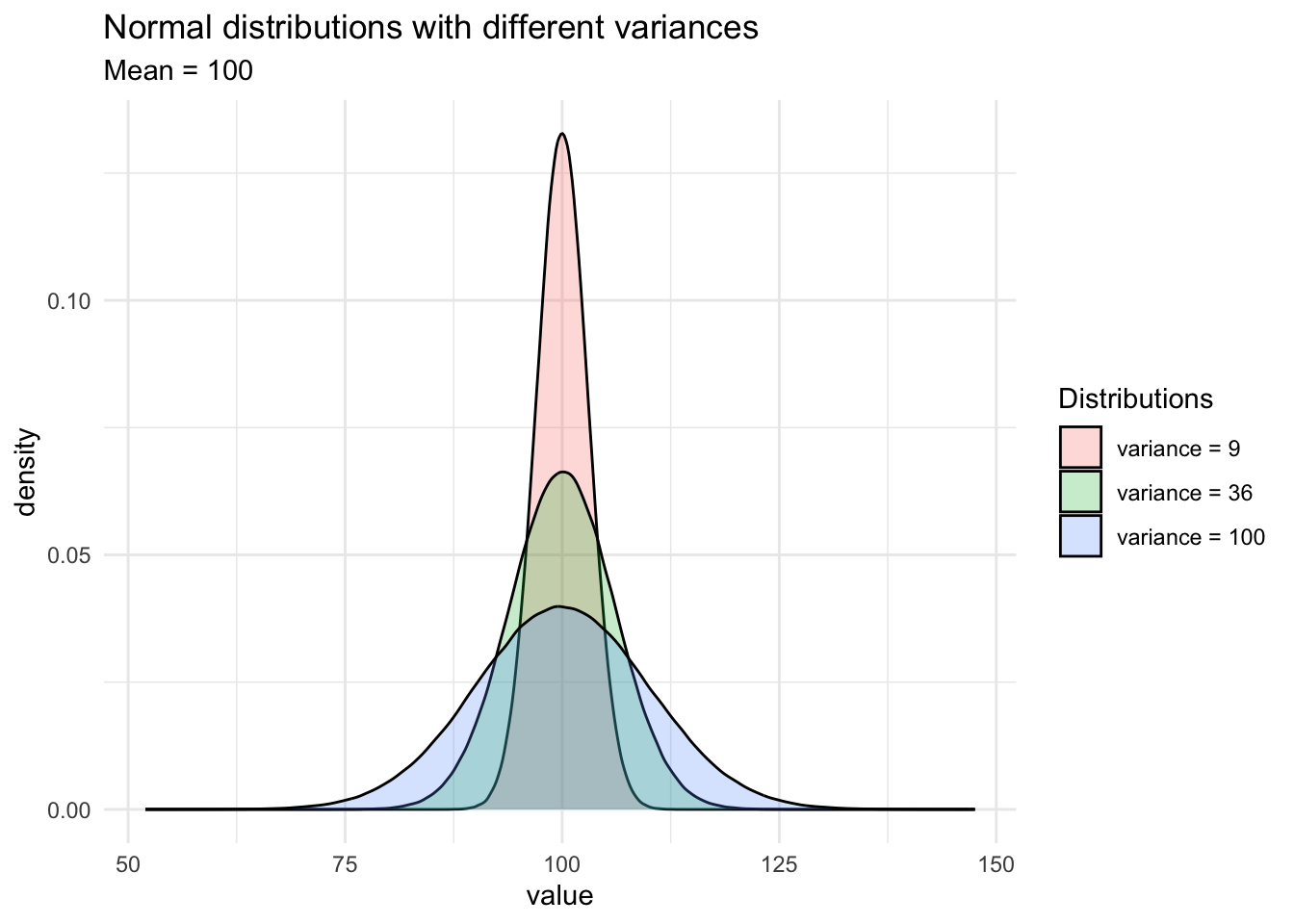 The normal standard distribution is a special case of the normal distribution where the mean is equal to 0 and the variance is equal to 1. A normal random variable \(X\) can always be transformed to a standard normal random variable \(Z\), a process known as “scaling” or “standardization”, by subtracting the mean from the observation, and dividing the result by the standard deviation. Formally:

Computing \(Z\)-scores allows to take into consideration all other students (i.e., the entire distribution) and gives a better measure of comparison. Let’s compute the \(Z\)-scores for the two exams, assuming that the score for both exams follow a normal distribution with the following parameters:

On the one hand, the \(Z\)-score for the exam in statistics is positive (\(z_{stat} = 2.5\)) which means that she performed better than average. On the other hand, her score for the exam in economics is negative (\(z_{econ} = -1.2\)) which means that she performed worse than average. Below an illustration of her grades in a standard normal distribution for better comparison: 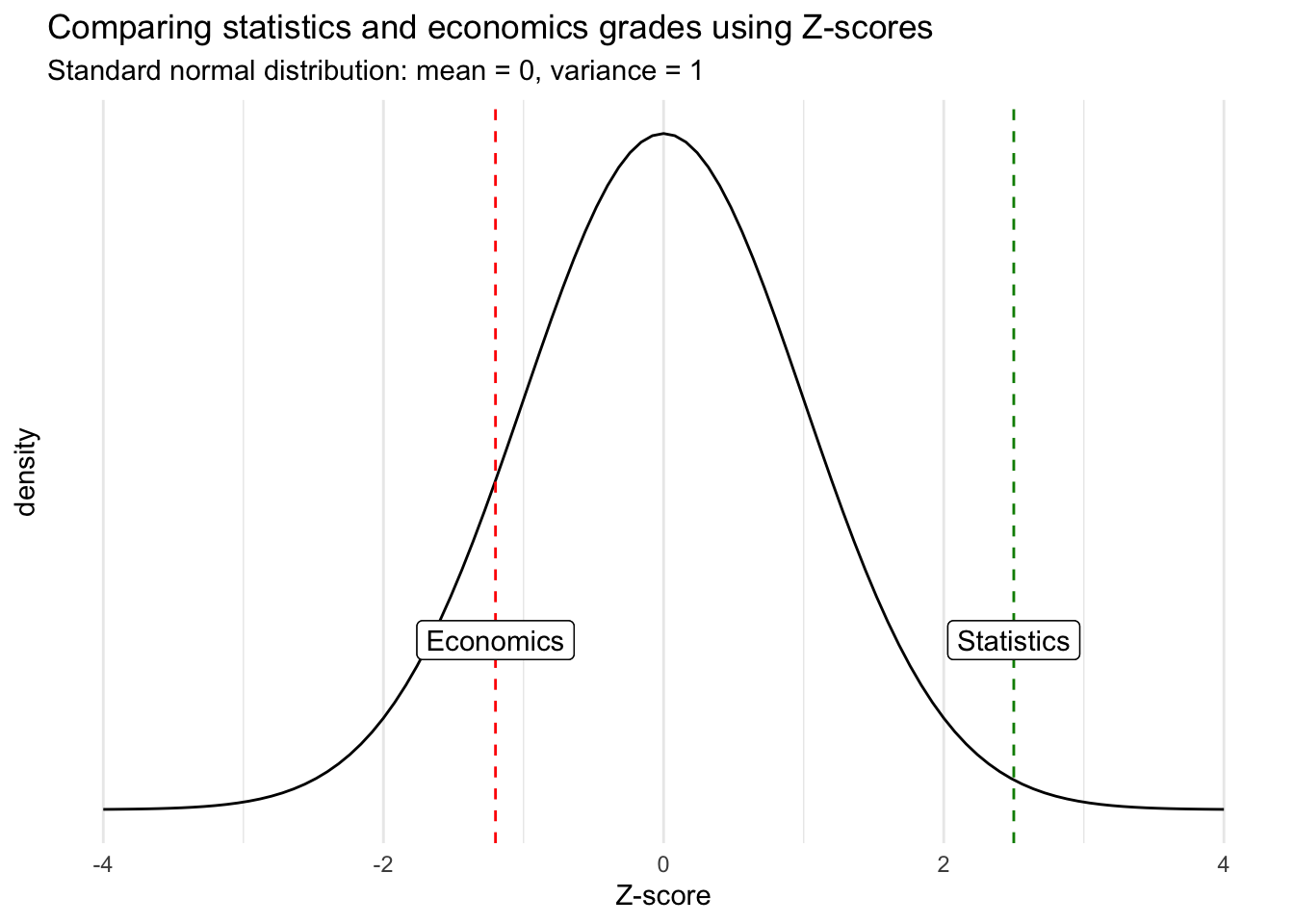 Although the score in economics is better in absolute terms, the score in statistics is actually relatively better when comparing each score within its own distribution.

Furthermore, \(Z\)-score also enables to compare observations that would otherwise be impossible because they have different units for example. Suppose you want to compare a salary in € with a weight in kg. Without standardization, there is no way to conclude whether someone is more extreme in terms of her wage or in terms of her weight. Thanks to \(Z\)-scores, we can compare two values that were in the first place not comparable to each other.

Areas under the normal distribution in R and by hand

Now that we have covered the \(Z\)-score, we are going to use it to determine the area under the curve of a normal distribution.

Note that there are several ways to arrive at the solution in the following exercises. You may therefore use other steps than the ones presented to obtain the same result.

We actually look for the shaded area in the following figure:

See that the random variable \(Z\) has already a mean of 0 and a standard deviation of 1, so no transformation is required. To find the probabilities by hand, we need to refer to the standard normal distribution table shown below: 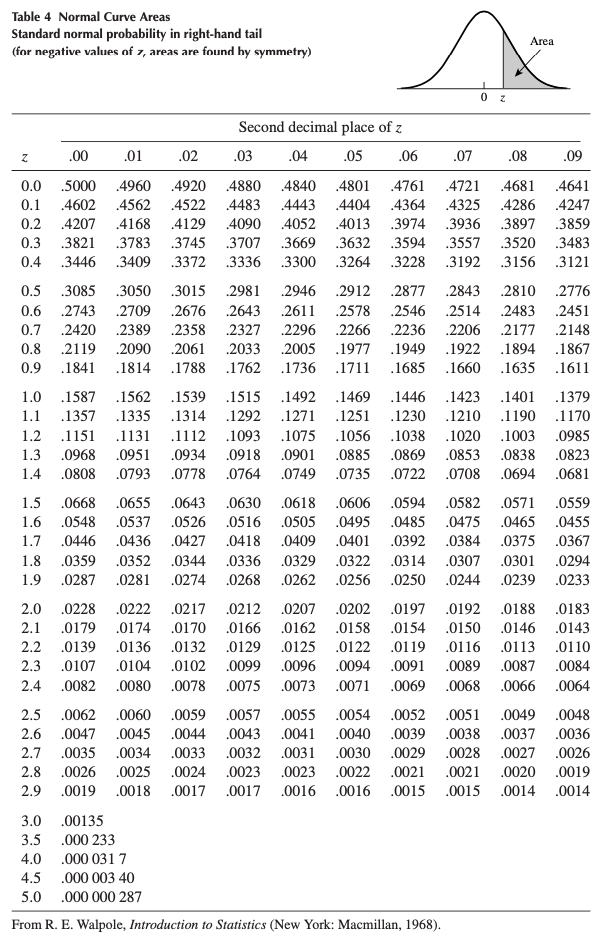 Note that the arguments by default for the mean and the standard deviation are mean = 0 and sd = 1. Since this is what we need, we can omit them.1

For this exercise we proceed by steps:

Again we proceed by steps for this exercise:

Recap the example presented in the empirical rule: Suppose that the scores of an exam in statistics given to all students in a Belgian university are known to have a normal distribution with mean \(\mu = 67\) and standard deviation \(\sigma = 9\). What fraction of the scores lies between 70 and 80?

After the standardization, \(x = 70\) becomes (in terms of \(z\), so in terms of deviation from the mean expressed in standard deviation):

The difference with the probability found using in R comes from the rounding.

To conclude this exercise, we can say that, given that the mean scores is 67 and the standard deviation is 9, 29.58% of the students scored between 70 and 80.

See another example in a context here.

Why is the normal distribution so crucial in statistics?

The normal distribution is important for three main reasons:

It is therefore useful to know how to test for normality in R, which is the topic of next sections.

How to test the normality assumption

As mentioned above, some statistical tests require that the data follow a normal distribution, or the result of the test may be flawed.

In this section, we show 4 complementary methods to determine whether your data follow a normal distribution in R.

A histogram displays the spread and shape of a distribution, so it is a good starting point to evaluate normality.

Let’s have a look at the histogram of a distribution that we would expect to follow a normal distribution, the height of 1,000 adults in cm: 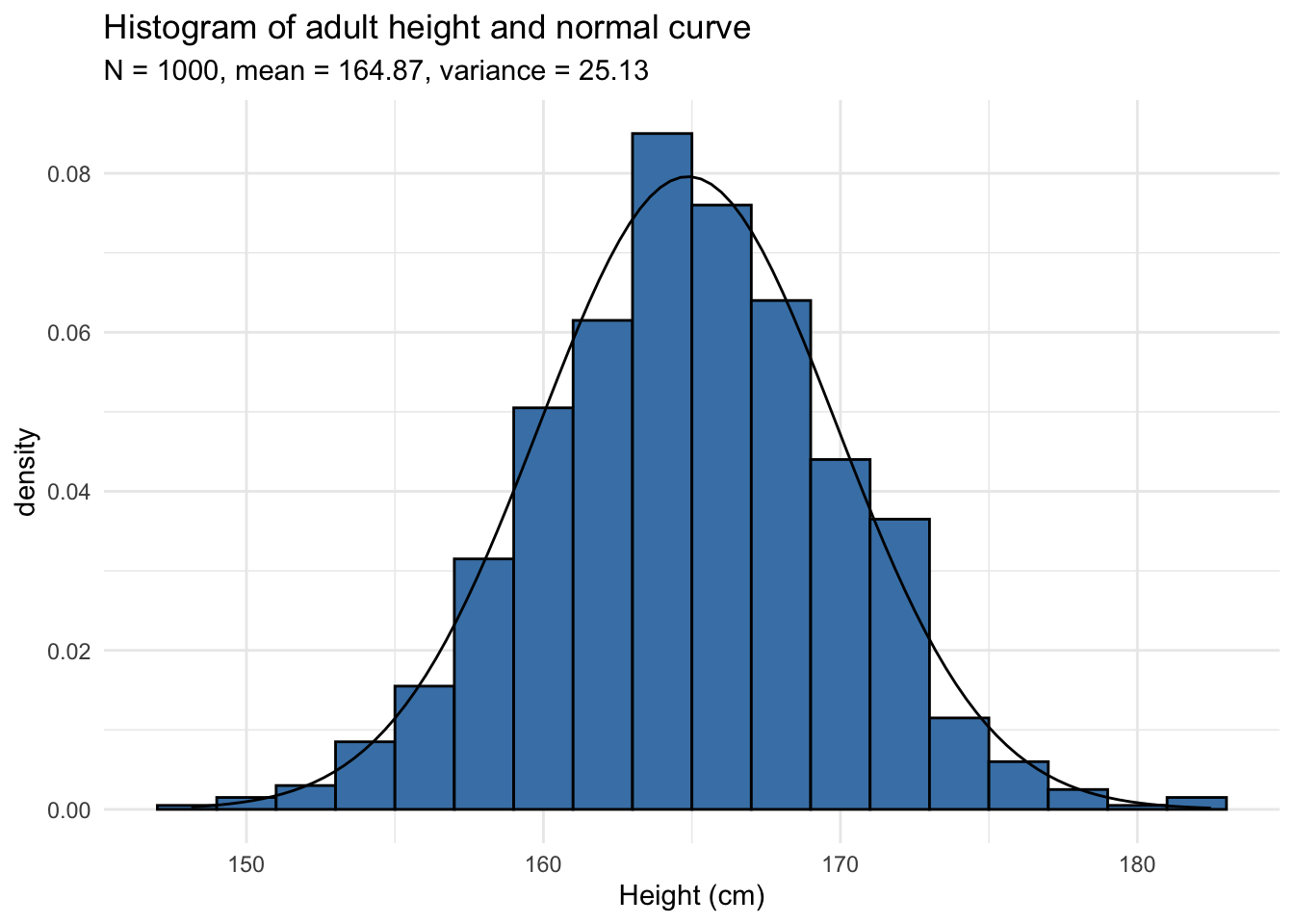 Below the minimal code for a histogram in R with the dataset iris: 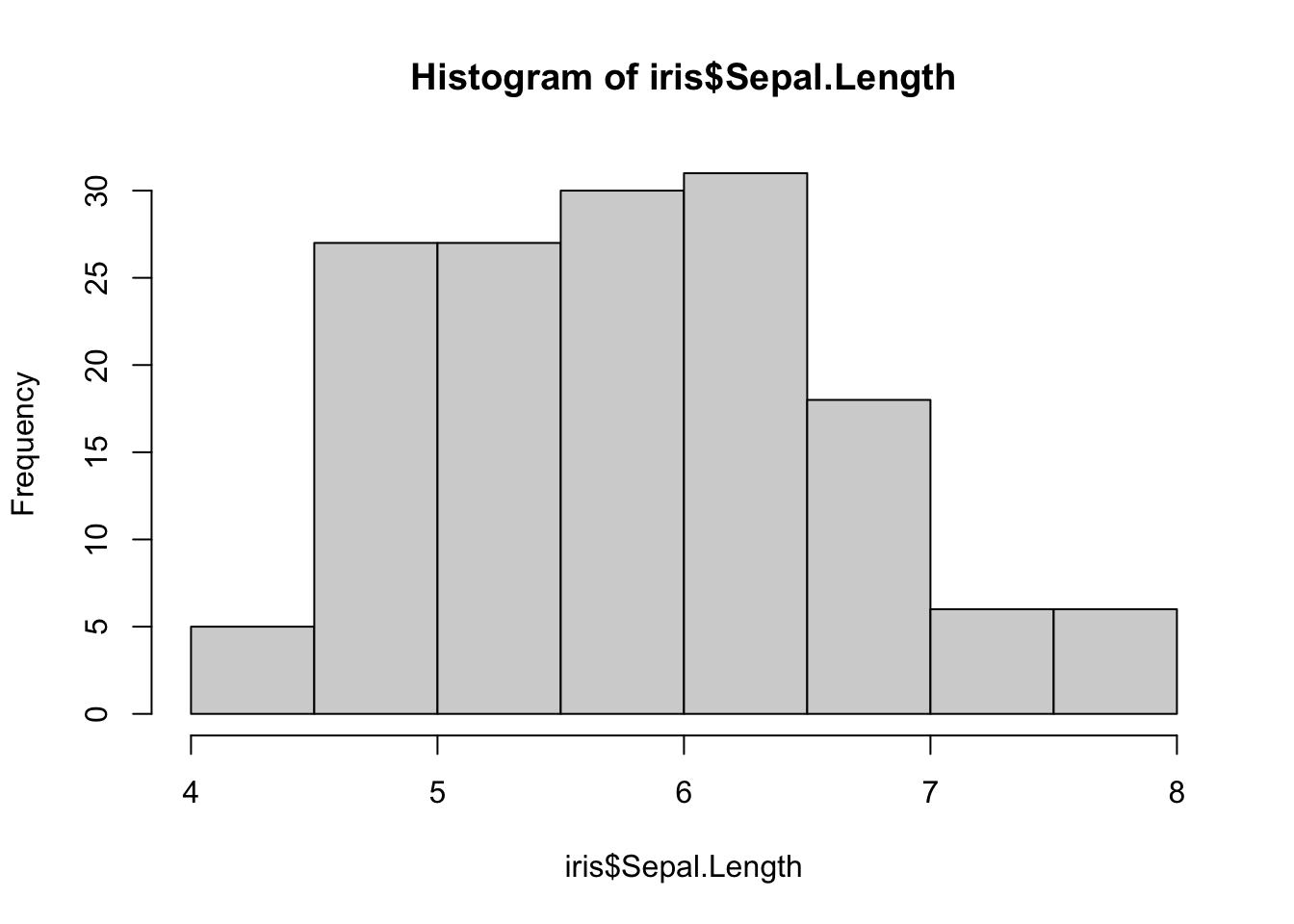 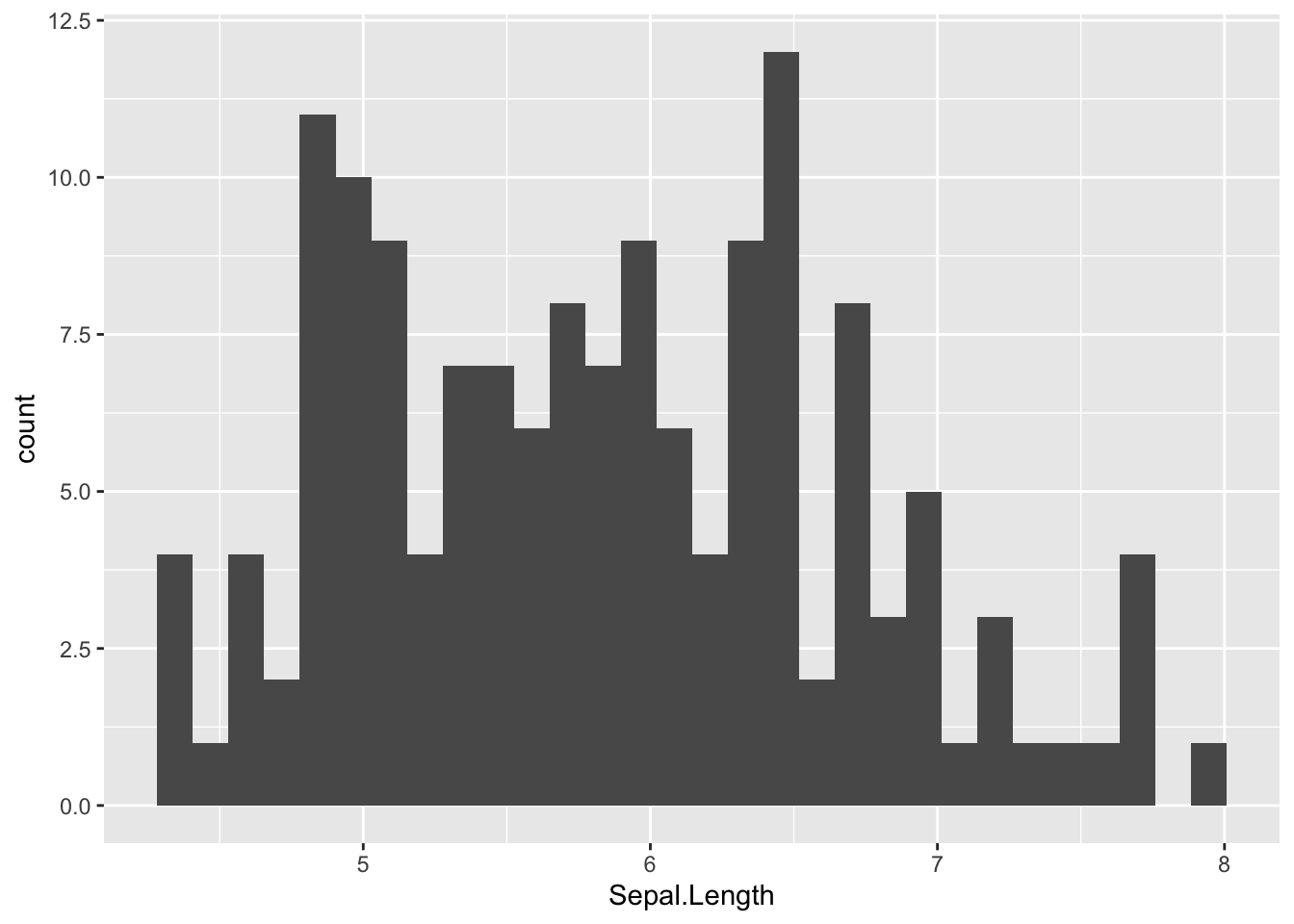 Histograms are however not sufficient, particularly in the case of small samples because the number of bins greatly change its appearance. Histograms are not recommended when the number of observations is less than 20 because it does not always correctly illustrate the distribution. See two examples below with datasets of 10 and 12 observations: 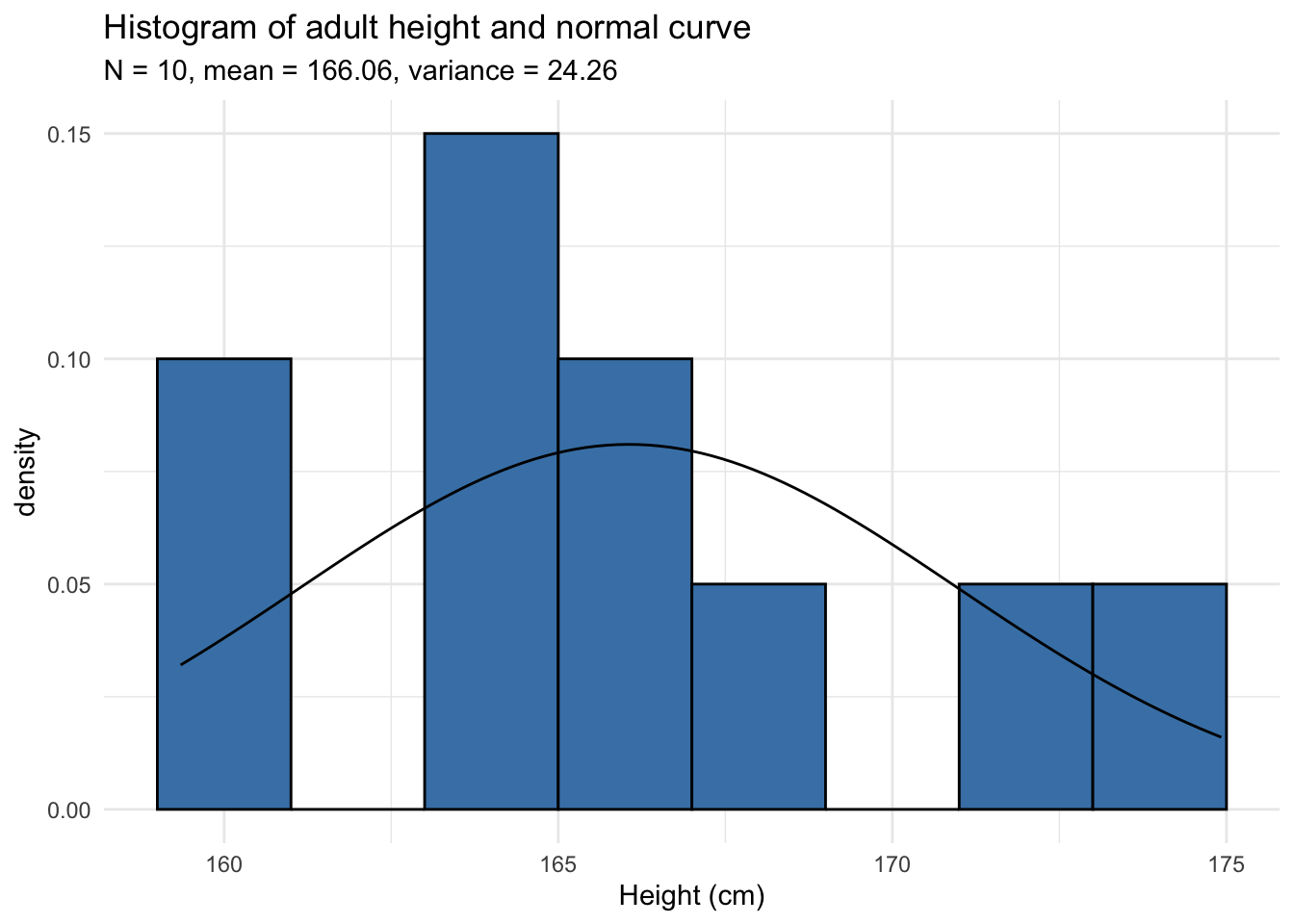 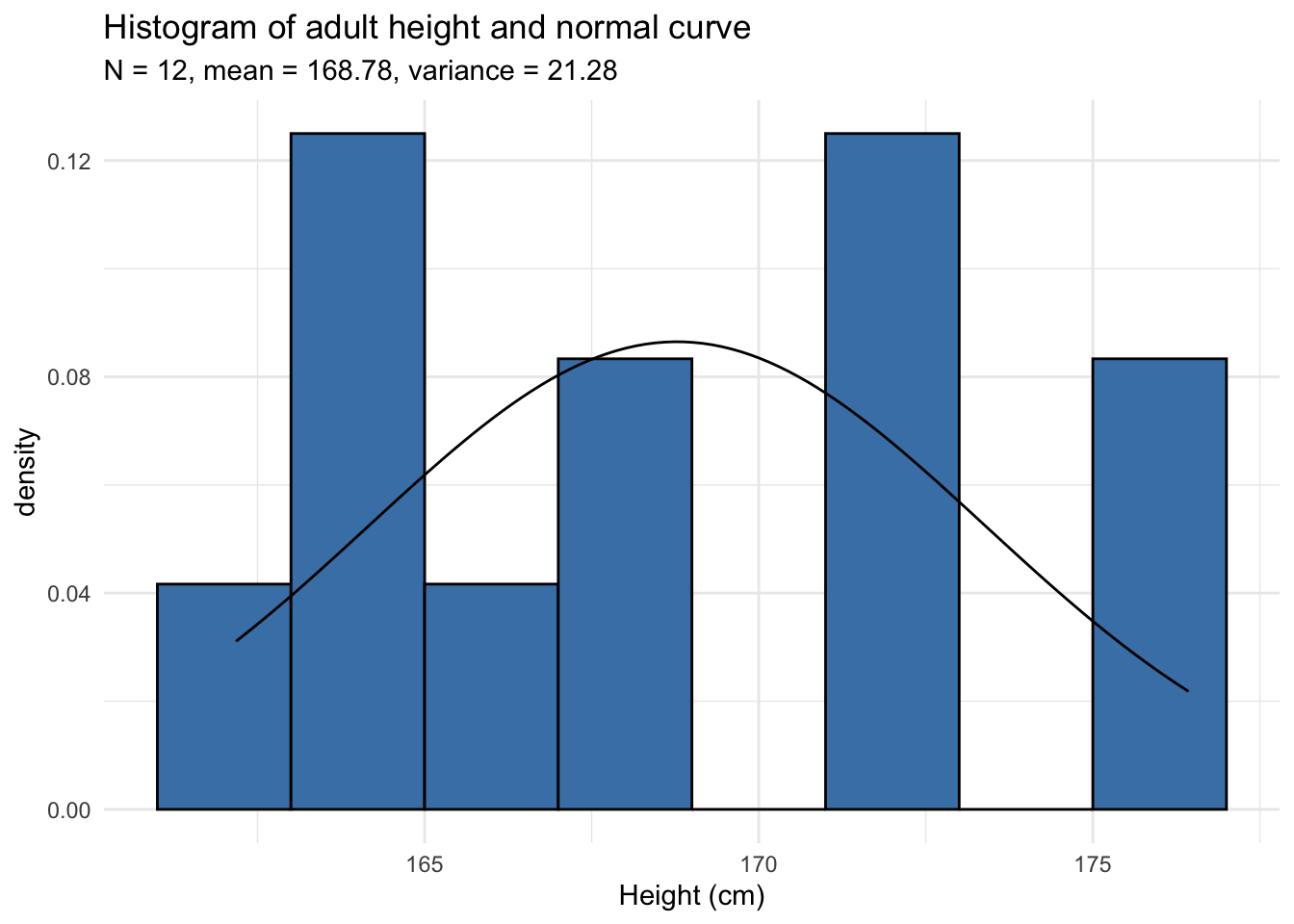 In the remaining of the article, we will use the dataset of the 12 adults. If you would like to follow my code in your own script, here is how I generated the data:

The rnorm() function generates random numbers from a normal distribution (12 random numbers with a mean of 165 and standard deviation of 5 in this case). These 12 observations are then saved in the dataset called dat_hist under the variable value. Note that set.seed(42) is important to obtain the exact same data as me.2

Density plots also provide a visual judgment about whether the data follow a normal distribution.

They are similar to histograms as they also allow to analyze the spread and the shape of the distribution. However, they are a smoothed version of the histogram.

Here is the density plot drawn from the dataset on the height of the 12 adults discussed above: 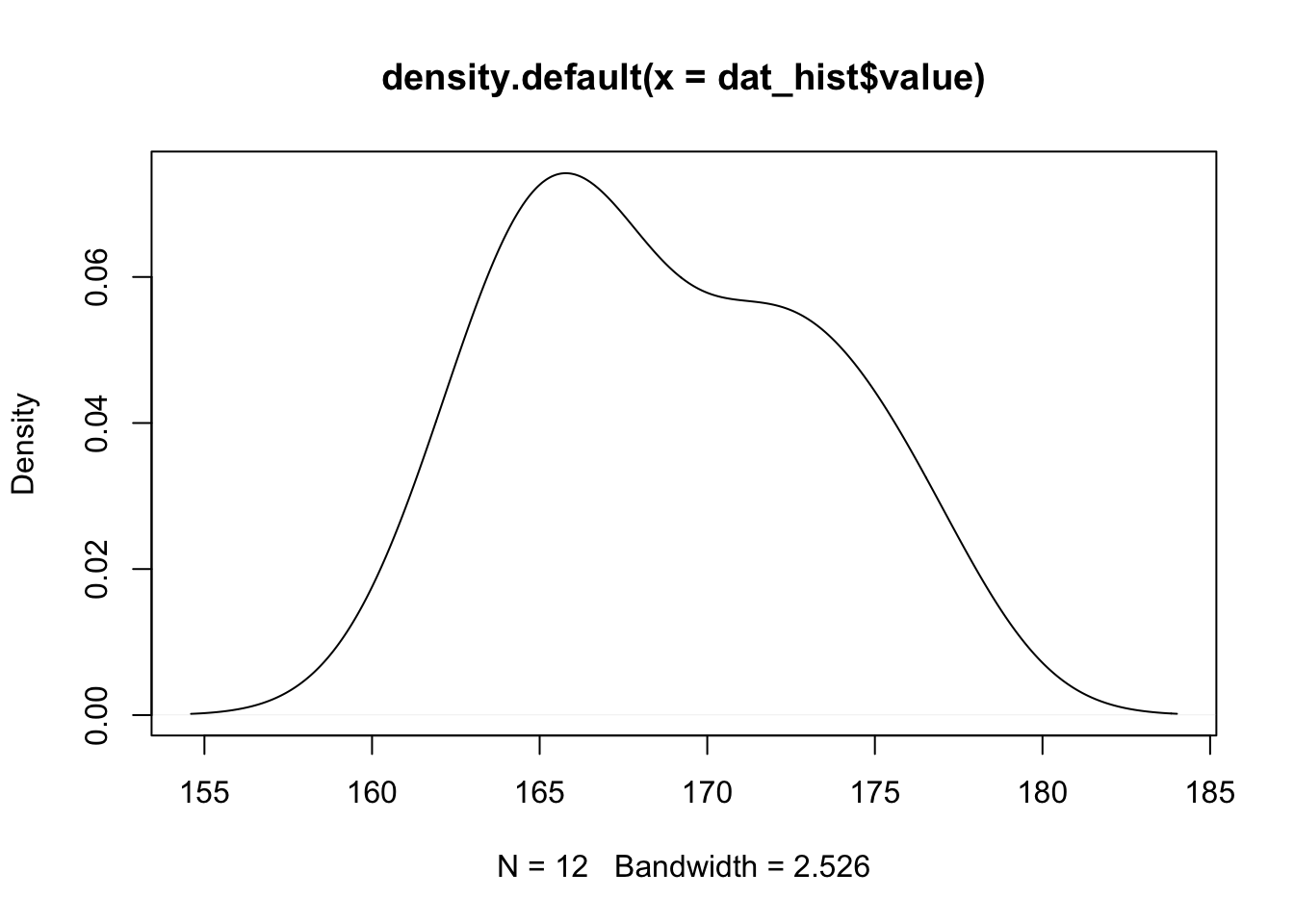 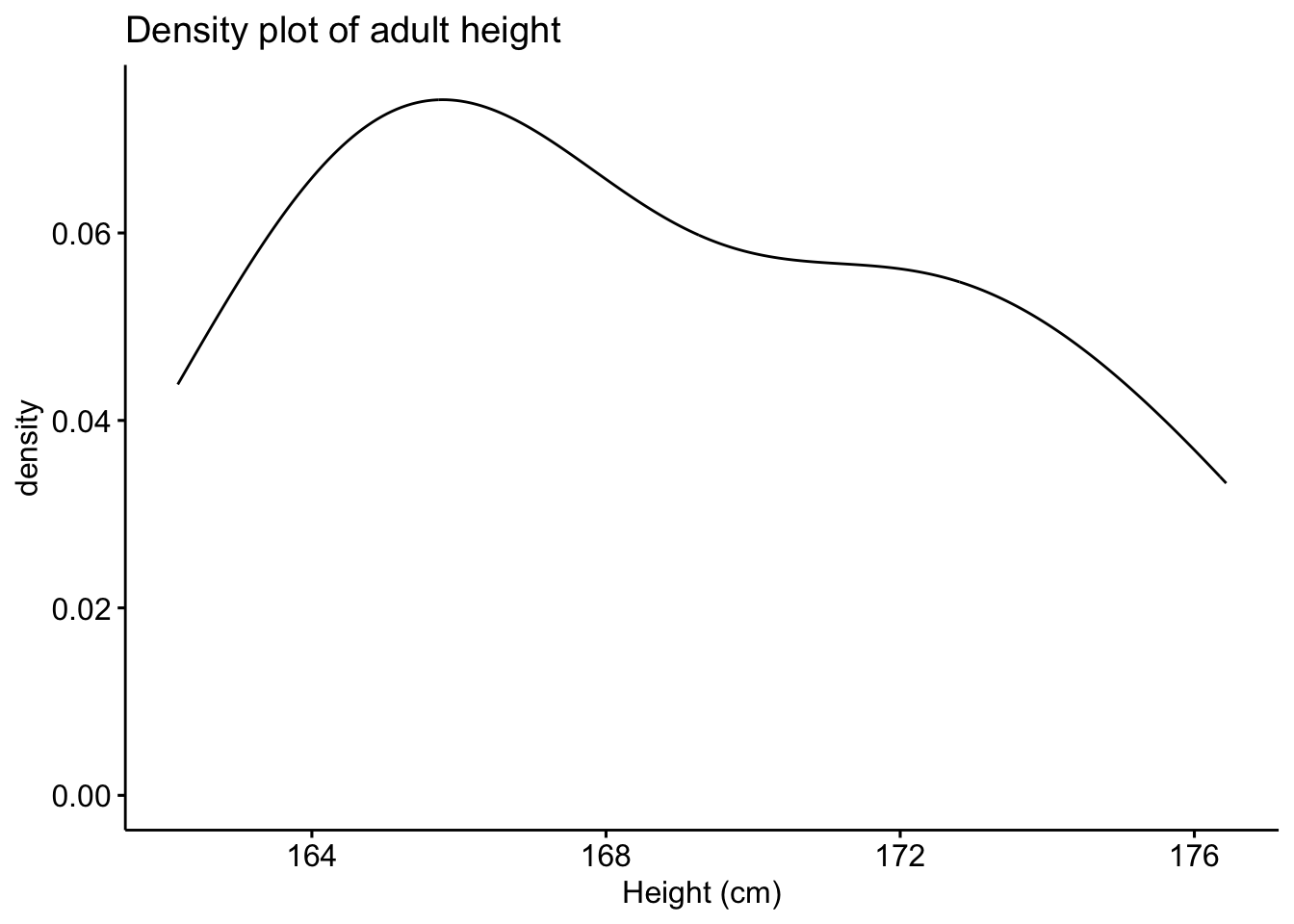 Since it is hard to test for normality from histograms and density plots only, it is recommended to corroborate these graphs with a QQ-plot. QQ-plot, also known as normality plot, is the third method presented to evaluate normality.

Like histograms and density plots, QQ-plots allow to visually evaluate the normality assumption.

Here is the QQ-plot drawn from the dataset on the height of the 12 adults discussed above: 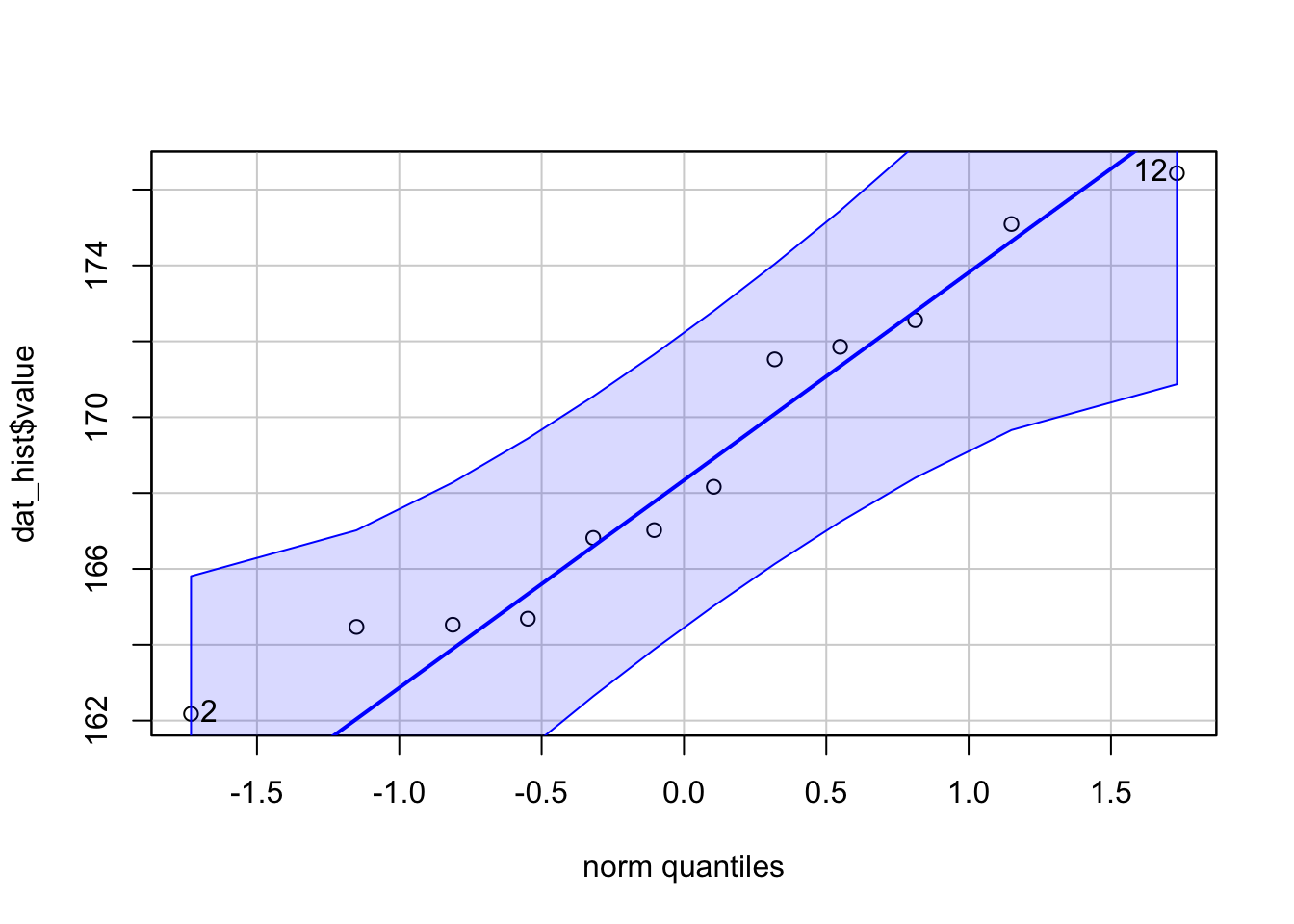 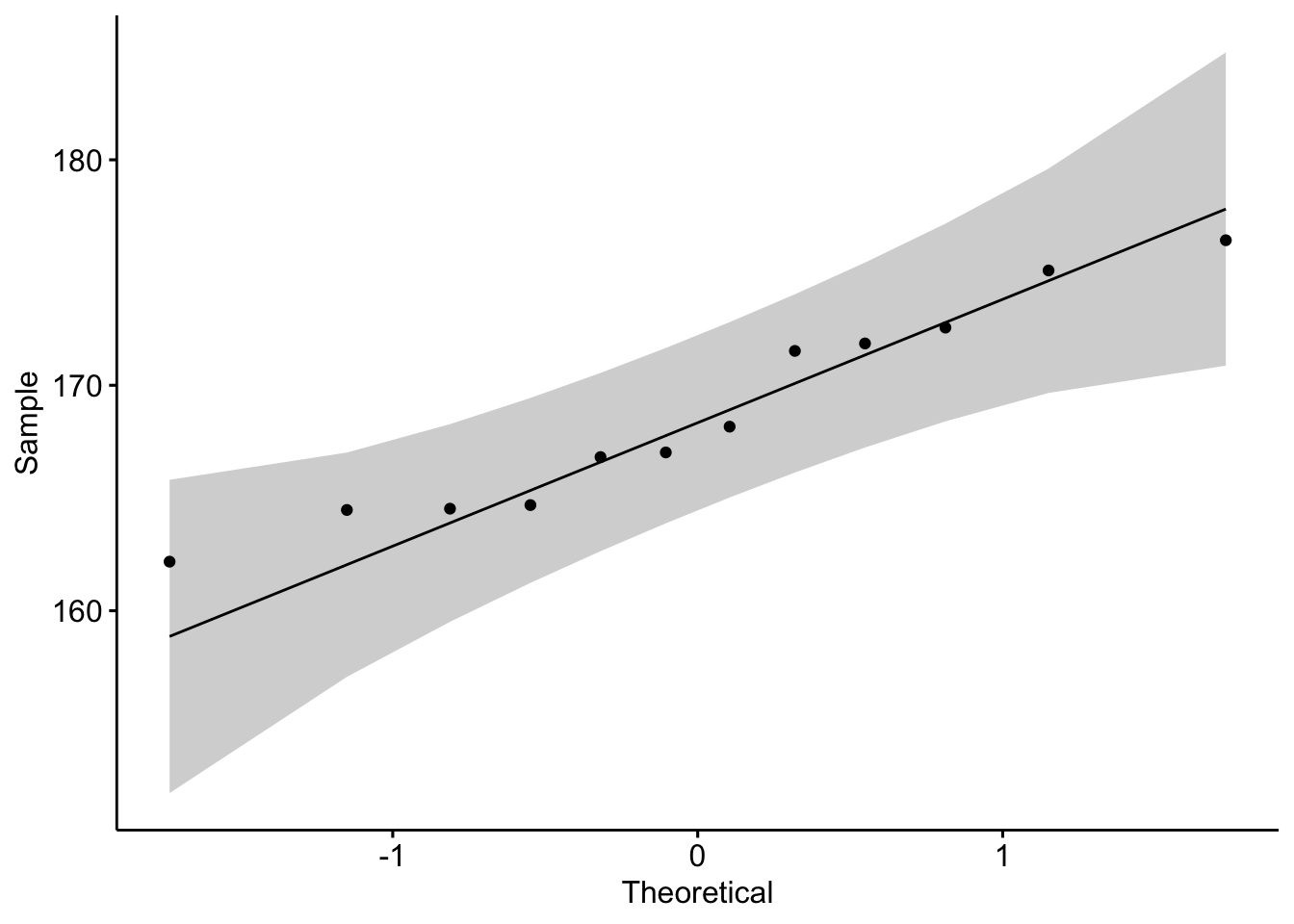 Instead of looking at the spread of the data (as it is the case with histograms and density plots), with QQ-plots we only need to ascertain whether the data points follow the line (sometimes referred as Henry’s line).

When facing a non-normal distribution as shown by the QQ-plot below (systematic departure from the reference line), the first step is usually to apply the logarithm transformation on the data and recheck to see whether the log-transformed data are normally distributed. 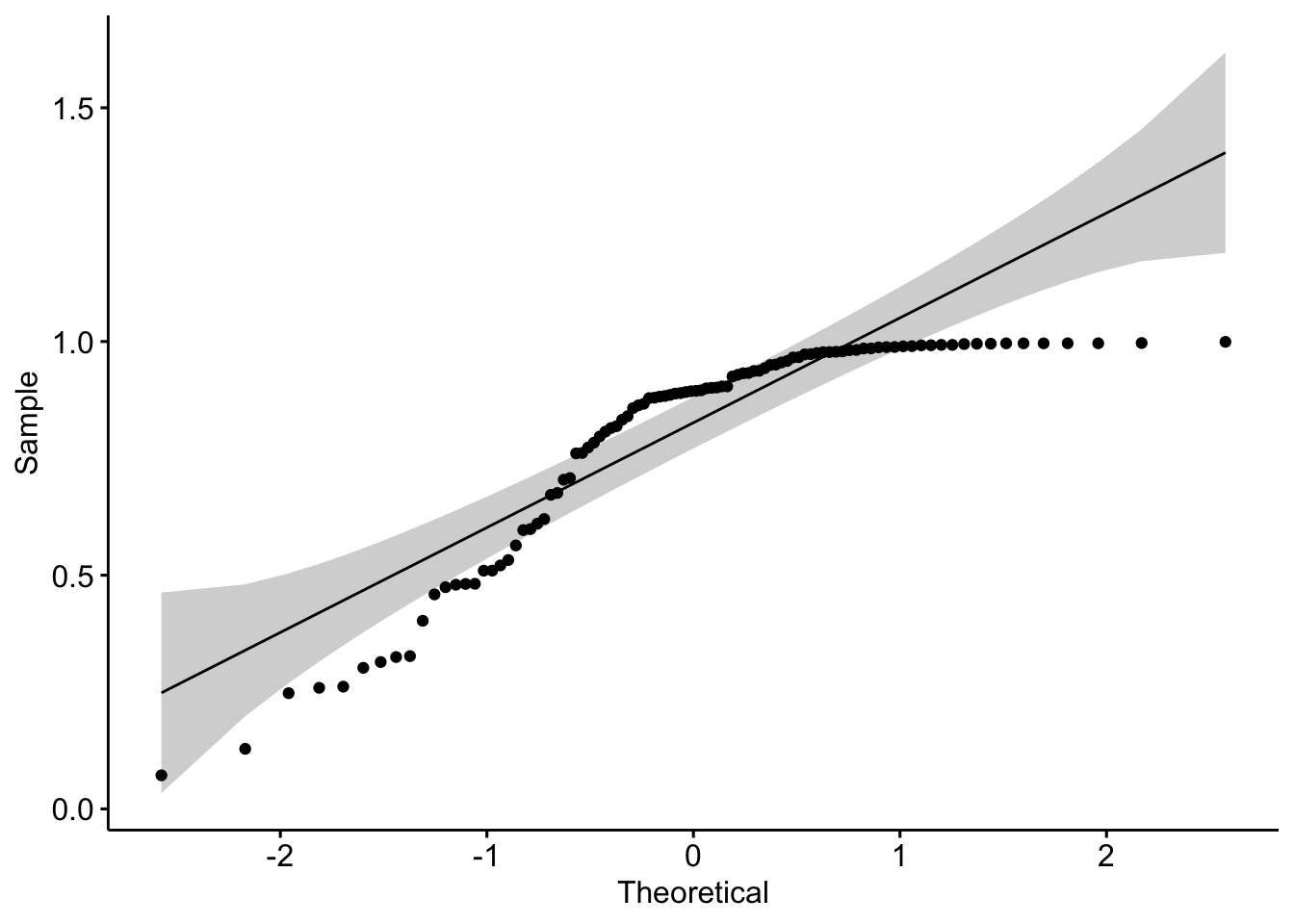 If this is the case, the data are said to follow a log-normal distribution. Applying the logarithm transformation can be done in R with the log() function.

Note that QQ-plots are also a convenient way to assess whether residuals from linear regression follow a normal distribution.

The 3 tools presented above were a visual inspection of the normality. Nonetheless, visual inspection may sometimes be unreliable so it is also possible to formally test whether the data follow a normal distribution with statistical tests.

These normality tests compare the distribution of the data to a normal distribution in order to assess whether observations show an important deviation from normality.

The two most common normality tests are Shapiro-Wilk’s test and Kolmogorov-Smirnov test. Both tests have the same hypotheses, that is:

From the output, we see that the \(p\)-value \(> 0.05\) implying that we do not reject the null hypothesis that the data follow a normal distribution. This test goes in the same direction than the QQ-plot, which showed no significant deviation from the normality (as all points lied within the confidence bands).

It is important to note that, in practice, normality tests are often considered as too conservative in the sense that for large sample size (\(n > 50\)), a small deviation from the normality may cause the normality condition to be violated.

A normality test is a hypothesis test, so as the sample size increases, their capacity of detecting smaller differences increases. So as the number of observations increases, the Shapiro-Wilk test becomes very sensitive even to a small deviation from normality. As a consequence, it happens that according to the normality test the data do not follow a normal distribution although the departures from the normal distribution is negligible so the data could in fact be considered to follow approximately a normal distribution. For this reason, it is often the case that the normality condition is verified based on a combination of all methods presented in this article, that is, visual inspections (with histograms and QQ-plots) and a formal inspection (with the Shapiro-Wilk test for instance).

I personally tend to prefer QQ-plots over histograms and normality tests so I do not have to bother about the sample size. This article showed the different methods that are available, your choice will of course depends on the type of your data and the context of your analyses.

Thanks for reading. I hope the article helped you to learn more about the normal distribution and how to test for normality in R.