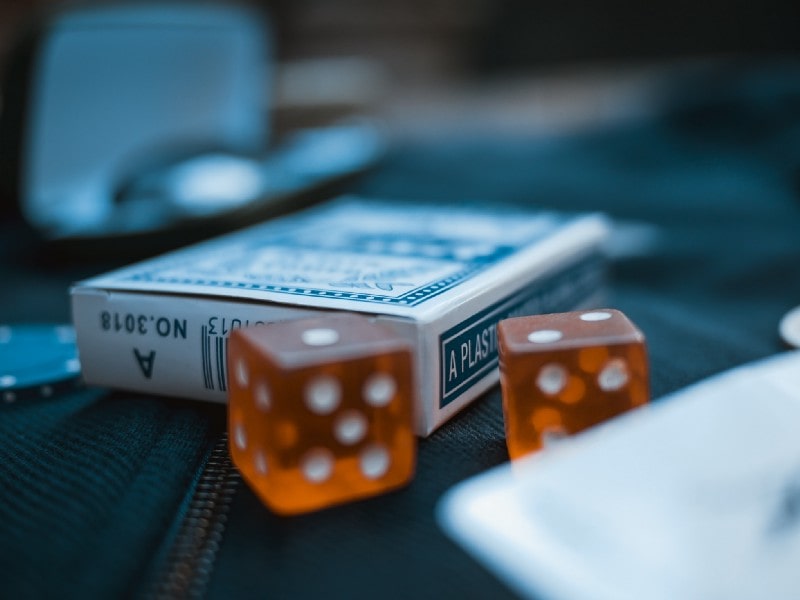 A probability is a number that reflects the chance that a particular event will occur. In other words, it quantifies (on a scale from 0 to 1, or from 0% to 100%) how likely an event is to occur.

Probability is a branch of mathematics that provides models to describe random processes. These mathematical tools allow to establish theoretical models for random phenomena and to use them to make predictions. Like every model, the probabilistic model is a simplification of the world. However, the model is useful as soon as it captures the essential features.

In this article, we present 9 fundamental formulas and concepts in probability that every data scientist should understand and master in order to appropriately handle any project involving probabilities.

1. A probability is always between 0 and 1

If the elements of a sample space (the set of all possible results of a randomized experiment) are equiprobable (= all elements have the same probability), then the probability of an event occurring is equal to the number of favourable cases (number of ways it can happen) divided by the number of possible cases (total number of outcomes):

3. Complement of an event

The probability of the complement (or opposite) of an event is:

For instance, the probability of not throwing a 3 with a dice is:

Suppose that the probability of a fire breaking out in two houses in a given year is: 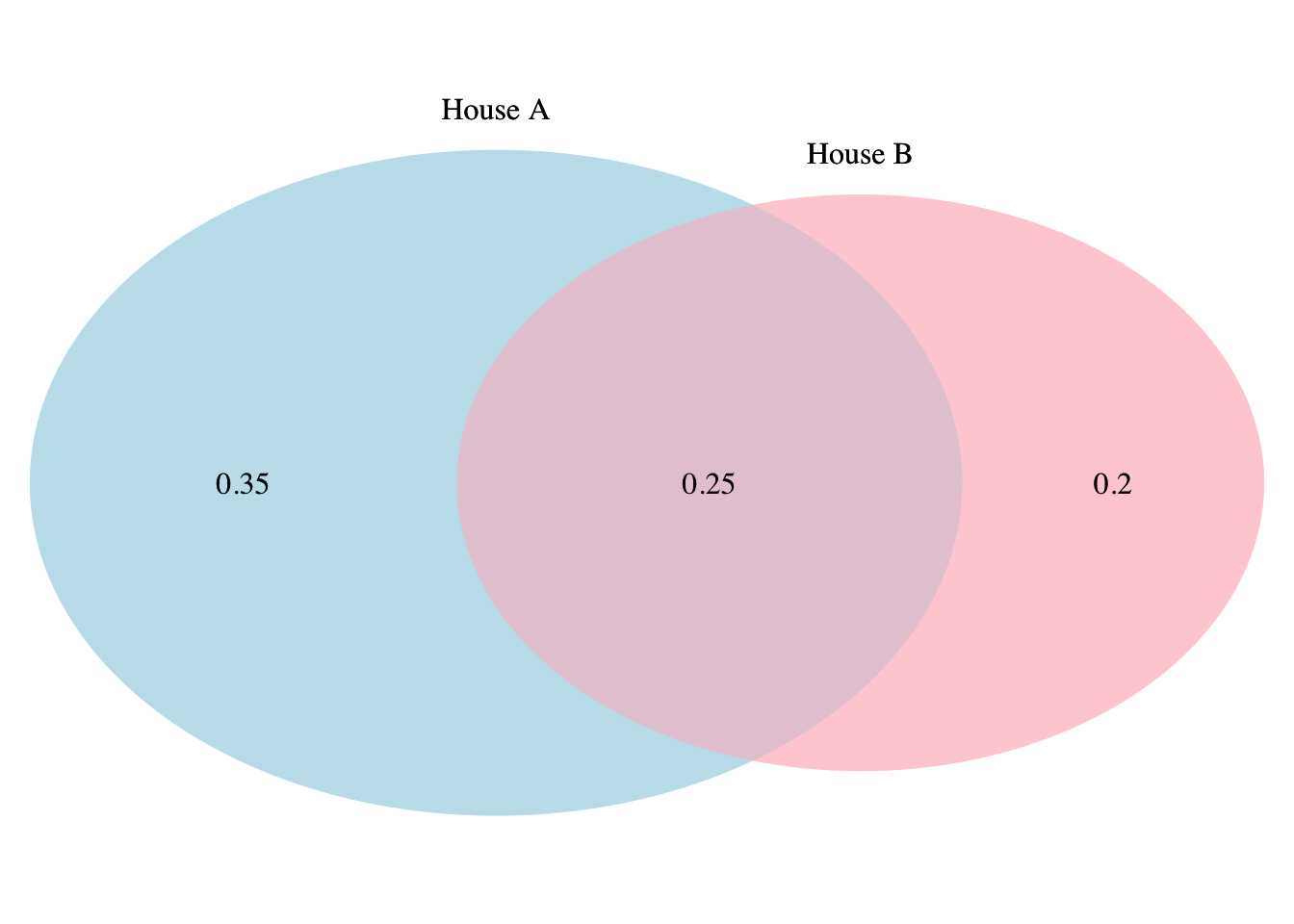 If two events are mutually exclusive (i.e., two events that cannot occur simultaneously), the probability of both events occurring \(P(A \cap B)\) is equal to 0, so the above formula becomes

For instance, if two coins are flipped, the probability of both coins being tails is

If two events are mutually exclusive, their joint probability is equal to 0:

Another important concept in probability is the independence of two events. Formally, the events A and B are independent if and only if

so the following equality holds

so the following equality does not hold

Suppose two events A and B and \(P(B) > 0\). The conditional probability of A given (knowing) B is the likelihood of event A occurring given that event B has occurred:

From the formula of the conditional probability, we can derive the multiplicative law:

From the formulas of the conditional probability and the multiplicative law, we can derive the Bayes’ theorem:

which is equivalent to

In order to illustrate the conditional probability and the Bayes’ theorem, suppose the following problem:

To answer this question, the following events are defined:

Moreover, we use a tree diagram to illustrate the statement: 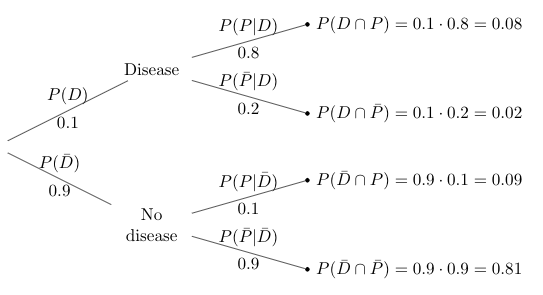 (The sum of all 4 scenarios must be equal to 1 since these 4 scenarios cover all possible cases.)

We are looking for the probability that an individual has the disease given that the result of the test is positive, \(P(D | P)\).

Following the formula of the conditional probability (Eq. 1) we have:

From the tree diagram, we can see that a positive test result is possible under two scenarios:

In order to find the probability of a positive test result, \(P(P)\), we need to sum up those two scenarios:

Based on the example of the disease and the diagnostic test presented above, we explain the most common accuracy measures:

Before diving into the details of these accuracy measures, here is an overview of the measures and the tree diagram with the labels added for each of the 4 scenarios: 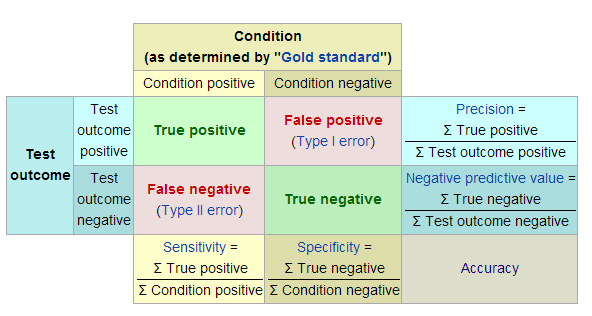 The false negatives (FN) are the number of people incorrectly labeled as not having the disease or the condition, when in reality it is present. It is like telling a women who is 7 months pregnant that she is not pregnant.

Moreover, the false negative rate (FNR) is defined as

The false positives (FP) are the number of people incorrectly labeled as having the disease or the condition, when in reality it is not present. It is like telling a man he is pregnant.

Moreover, the false positive rate (FPR) is defined as

The sensitivity of a test, also referred as the recall, measures the ability of a test to detect the condition when the condition is present (the percentage of sick people who are correctly identified as having the disease):

where TP is the true positives.

where TN is the true negatives.

In order to use the formula in section 2, one must know how to count the number of possible elements (both for favorable and possible cases).

There are 3 main counting techniques in probability:

See below how to count the number of possible elements in case of equiprobable results.

The multiplication rule is as follows:

In a restaurant, a customer has to choose a starter, a main course and a dessert. The restaurant offers 2 starters, 3 main courses and 2 desserts. How many different choices are possible?

The number of permutations is as follows:

The order is important in permutations!

Count the permutations of length 2 of the set \(A = \{a, b, c, d\}\), without a letter being repeated. How many permutations do you find?

The number of combinations is as follows:

The order is not important in combinations!

In a family of 5 children, what is the probability that there are 3 girls and 2 boys? Assume that the probabilities of giving birth to a girl and a boy are equal.

Probability of 3 girls and 2 boys:

Thanks for reading. I hope this article helped you to understand the most important formulas and concepts from probability theory.