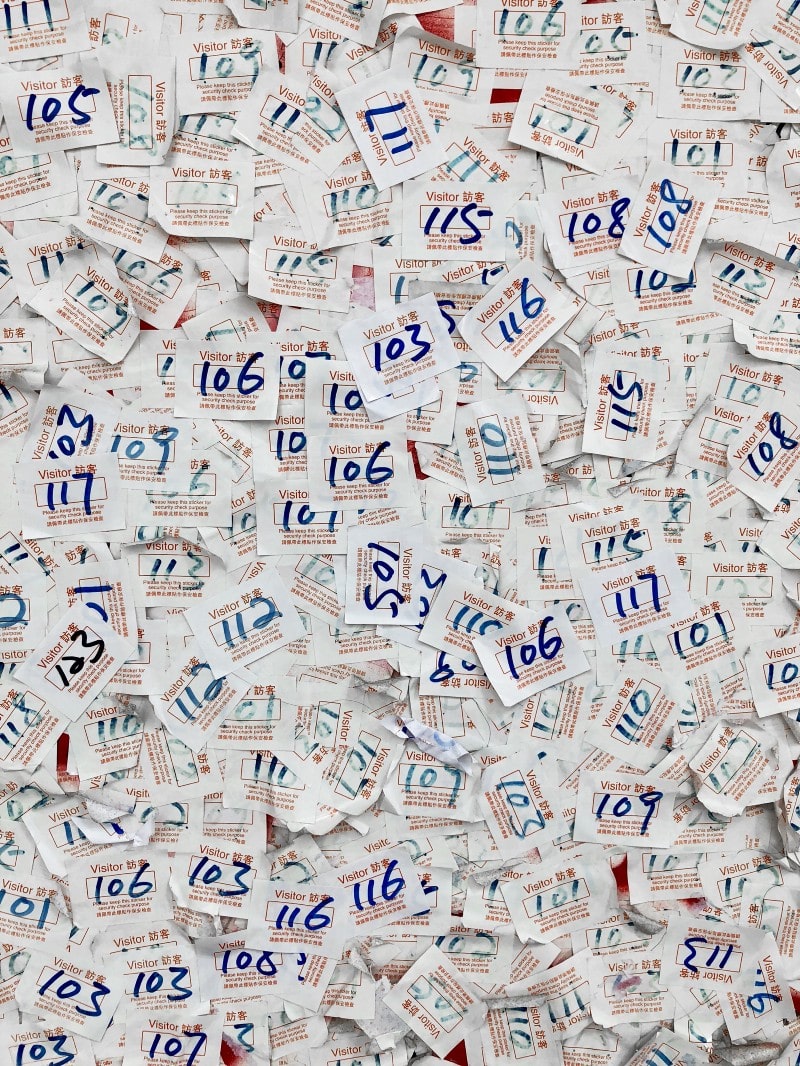 Descriptive statistics (in the broad sense of the term) is a branch of statistics aiming at summarizing, describing and presenting a series of values or a dataset. Long series of values without any preparation or without any summary measures are often not informative due to the difficulty of recognizing any pattern in the data. Below an example with the height (in cm) of a population of 100 adults:

Facing this series, it is hard (not to say impossible) for anyone to understand the data and have a clear view of the size of these adults in a reasonable amount of time. Descriptive statistics allow to summarize, and thus have a better overview of the data. Of course, by summarizing data through one or several measures, some information will inevitably be lost. However, in many cases it is generally better to lose some information but in return gain an overview.

Descriptive statistics is often the first step and an important part in any statistical analysis. It allows to check the quality of the data by detecting potential outliers (i.e., data points that appear to be separated from the rest of the data), collection or encoding errors. It also helps to “understand” the data and if well presented, descriptive statistics is already a good starting point for further analyses.

Several different measures (called statistics if we are analyzing a sample) are used to summarize the data. Some of them give an understanding about the location of the data, others give and understanding about the dispersion of the data. In practice, both types of measures are often used together in order to summarize the data in the most concise but complete way. We illustrate this point with the graph below, representing the height (in cm) of 100 persons divided into two groups (50 persons in each group): 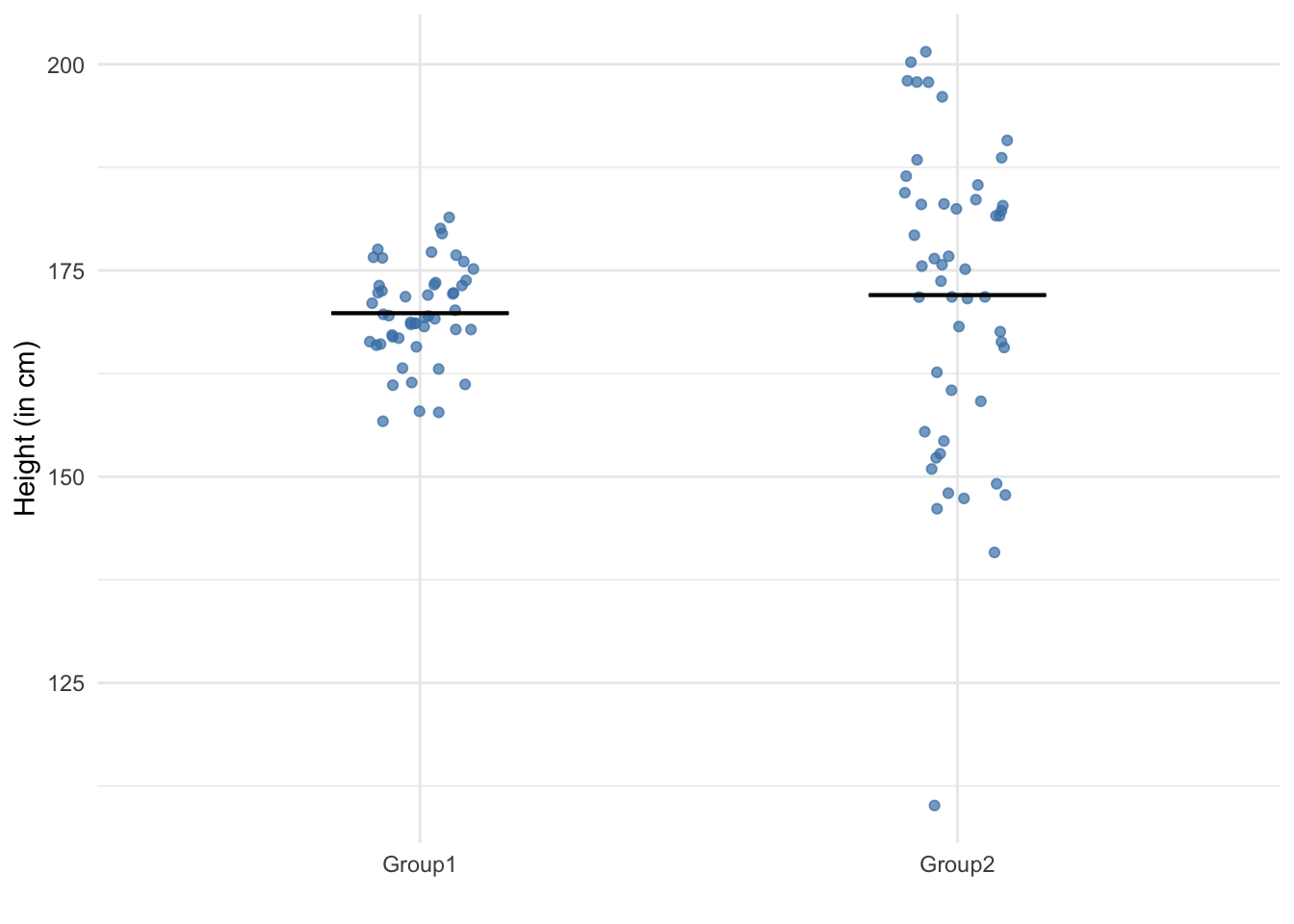 The black line corresponds to the mean. The mean height (in cm) is similar in both groups. However, it is clear that the dispersion of heights are very different in the two groups. For this reason, location or dispersion measures are often not enough if presented individually and it is a good practice to present several statistics from both types of measures.

In the following sections, we detail the most common location and dispersion measures and illustrate them with examples.

Location measures allow to see “where” the data are located, around which values. In other words, location measures give an understanding on what is the central tendency, the “position” of the data as a whole. It includes the following statistics (others exist but we focus on the most common ones):

We detail and compute by hand each of them in the following sections.

Minimum (\(min\)) and maximum (\(max\)) are simply the lowest and largest values, respectively. Given the height (in cm) of a sample of 6 adults:

The minimum is 169.4 cm and the maximum is 188.7 cm. These two basic statistics give a clear idea about the size of the smallest and tallest of these 6 adults.

The mean, also known as average, is probably the most common statistics. It gives an idea on what is the average value, that is, the central value of the data or in other words the center of gravity. The mean is found by summing all values and dividing this sum by the number of observations (denoted \(n\)):

Given our sample of 6 adults presented above, the mean is:

where the subscript of \(x\) denotes the numbering of the sorted data. The formulas look harder than they really are, so let’s see with two concrete examples.

Given the height of a sample of 7 adults taken from the 100 adults presented in the introduction:

We first sort the order from lowest to highest:

Even number of observations

We sort the values in ascending order:

So we sum the third and fourth values from the sorted values and divide this sum by 2 (which is equivalent than taking the mean of these two middle values):

In conclusion, the median size of these 6 adults is 178.8 cm. Again, remark that there are as many observations below as above 178.8 cm.

Although the mean and median are often relatively close to each other they should not be confused since they both have advantages and disadvantages in different contexts. Besides the fact that almost everyone knows (or at least have heard about) the mean, it has the advantage that it gives a unique picture for each different series of data. However, it has the disadvantage that the mean is sensible to outliers (i.e., extreme values). On the other hand, the advantage of the median is that it is resistant to outliers and the inconvenient is that it may be the exact same value for very different series of data (so not unique to the data).

Given the previous example, one may then choose to always use the median instead of the mean. However, the median has it own inconvenient which the mean does not have: the median is less unique and less specific to its underlying data than the mean. Consider the following data, representing the grades of 5 students taking a statistics and economics exam:

The median of the grades is the same in economics and statistics (median = 10). Therefore, had we computed only the medians, we could have concluded that the students performed as well in economics as in statistics. However, although the medians are exactly the same for both classes, it is clear that students performed better in economics than in statistics. In fact, the mean of the grades in economics is 13.6 and the mean of the grades in statistics is 8.6. What we have just shown here is that the median is based only on one single value, the middle value, or on the two middle values if there are an even number of observations, while the mean is based on all values (and thus includes more information). The median is therefore not sensible to outliers, but it is also not unique (i.e., not specific) to different series of data, whereas the mean is much more likely to be different and unique for different series of data. This difference in terms of specificity and uniqueness between the two measures may make the mean more useful for data with no outlier.

In conclusion, depending on the context and the data, it is often more interesting to report the mean or the median, or both. As a last remark regarding the comparison between the two most important location measures, note that when the mean and median are equal, the distribution of your data can often be considered to follow a normal distribution (also referred as Gaussian distribution).

The steps are the same for both an odd and even number of observations. Here is an example with the following series, representing the height in cm of 9 adults:

We first order from lowest to highest:

A note on deciles and percentiles

Given the height of 9 adults:

The mode is 170 because it is the most common value with 3 occurrences. All other values appear only once.

Given the eye color of the 9 adults presented above:

Brown is the most frequent color, so the mode is brown.

As for location measures, we detail and compute by hand each of these statistics one by one.

The range is the difference between the maximum and the minimum value:

Given the height (in cm) of our sample of 6 adults:

The range is 188.7 \(-\) 169.4 \(=\) 19.3 cm. The advantage of the range is that it is extremely easy to compute it and it gives a precise idea on what are the possible values in the data. The disadvantage is that it relies on the two most extreme values only. 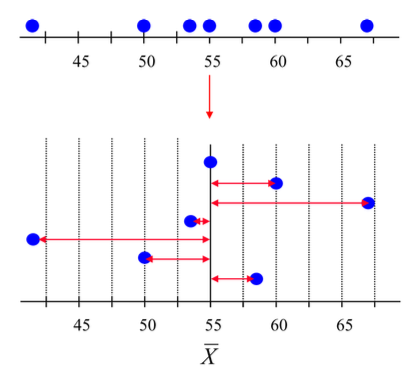 The standard deviation is a bit more complex than the previous statistics in the sense that there are two formulas depending on whether we face a sample or a population. A population includes all members from a specified group, all possible outcomes or measurements that are of interest. A sample consists of some observations drawn from the population, so a part or a subset of the population. For instance, the population may be “all people living in Belgium” and the sample may be “some people living in Belgium”. Read this article on the difference between population and sample if you want to learn more.

Standard deviation for a population

The standard deviation for a population, denoted \(\sigma\), is:

As you can see from the formula, the standard deviation is actually the average deviation of the data from their mean \(\mu\). Note the square for the difference between the observations and the mean to avoid that negative differences are compensated by positive differences.

For the sake of easiness, imagine a population of only 3 adults (the steps are the same with a large population, the computation is just longer). Below their heights (in cm):

In conclusion, the standard deviation for the heights of these 3 adults is 8.91 cm. This means that, on average, the height of the adults in this population deviates from the mean by 8.91 cm.

Standard deviation for a sample

Imagine now that the 3 adults presented in the previous section is a sample instead of a population:

The mean is still 172.6 (rounded to 1 decimal) since the mean is the same whether it is a population or a sample. The standard deviation is now:

In conclusion, the standard deviation for the heights of these 3 adults is 10.92 cm. The interpretation is the same than for a population.

Variance for a population

As you can see, the formula for variance is the same than for standard deviation, except that the square root is removed for the variance. Remember the heights of our population of 3 adults:

(The difference with the above result is due to rounding.)

Variance for a sample

Imagine again that the 3 adults in the previous section is a sample instead of a population:

(The difference with the above result is due to rounding.)

For completeness, below a table showing the different notations for variance and standard deviation in case of population and sample:

Remember the first \(q_{0.25}\) and third quartile \(q_{0.75}\) presented earlier (see this section). The interquartile range is another measure of dispersion of the data, using the quartiles. It is the difference between the third and first quartile:

Considering the height of the 9 adults presented in the section about the first and third quartile:

Consider the height of a sample of 4 adults:

Coefficient of variation vs. standard deviation

Although the coefficient of variation is rather unknown to the public, it is, in fact, worth presenting when making descriptive statistics.

The coefficient of variation is a ratio of two statistics with the same units. It has thus no unit and is independent of the unit in which the data has been measured. Being unit-free, coefficients of variation computed on datasets or variables with different units or widely different means can be compared to conclude, in fine, which data or variables is more (or less) dispersed. For instance, consider a sample of 10 women with their heights in cm and their salaries in €. The coefficients of variation are 0.032 and 0.061 respectively for the height and the salary. We can conclude that, relative to their respective average, their salaries vary more than their heights for these women (since the coefficient of variation is larger for the salary compared to the coefficient variation for the height).