Kruskal-Wallis test, or the nonparametric version of the ANOVA

In a previous article, we showed how to do an ANOVA in R to compare three or more groups.

Remember that, as for many statistical tests, the one-way ANOVA requires that some assumptions are satisfied in order to be able to use and interpret the results. In particular, the ANOVA requires that residuals follow approximately a normal distribution.1

Luckily, if the normality assumption is not satisfied, there is the nonparametric version of the ANOVA: the Kruskal-Wallis test.

In the rest of the article, we show how to perform the Kruskal-Wallis test in R and how to interpret its results. We will also briefly show how to do post-hoc tests and how to present all necessary statistical results directly on a plot.

Data for the present article is based on the penguins dataset (an alternative to the well-known iris dataset), accessible via the {palmerpenguins} package:

The original dataset contains data for 344 penguins of 3 different species (Adelie, Chinstrap and Gentoo). It contains 8 variables, but we focus only on the flipper length and the species for this article, so we keep only those 2 variables:

(If you are unfamiliar with the pipe operator (%>%), you can also select variables with penguins[, c("species", "flipper_length_mm")]. Learn more ways to select variables in the article about data manipulation.)

It is always a good practice to do some descriptive statistics for the entire sample and by group before doing the test, so we have a broad overview of the data at hand. 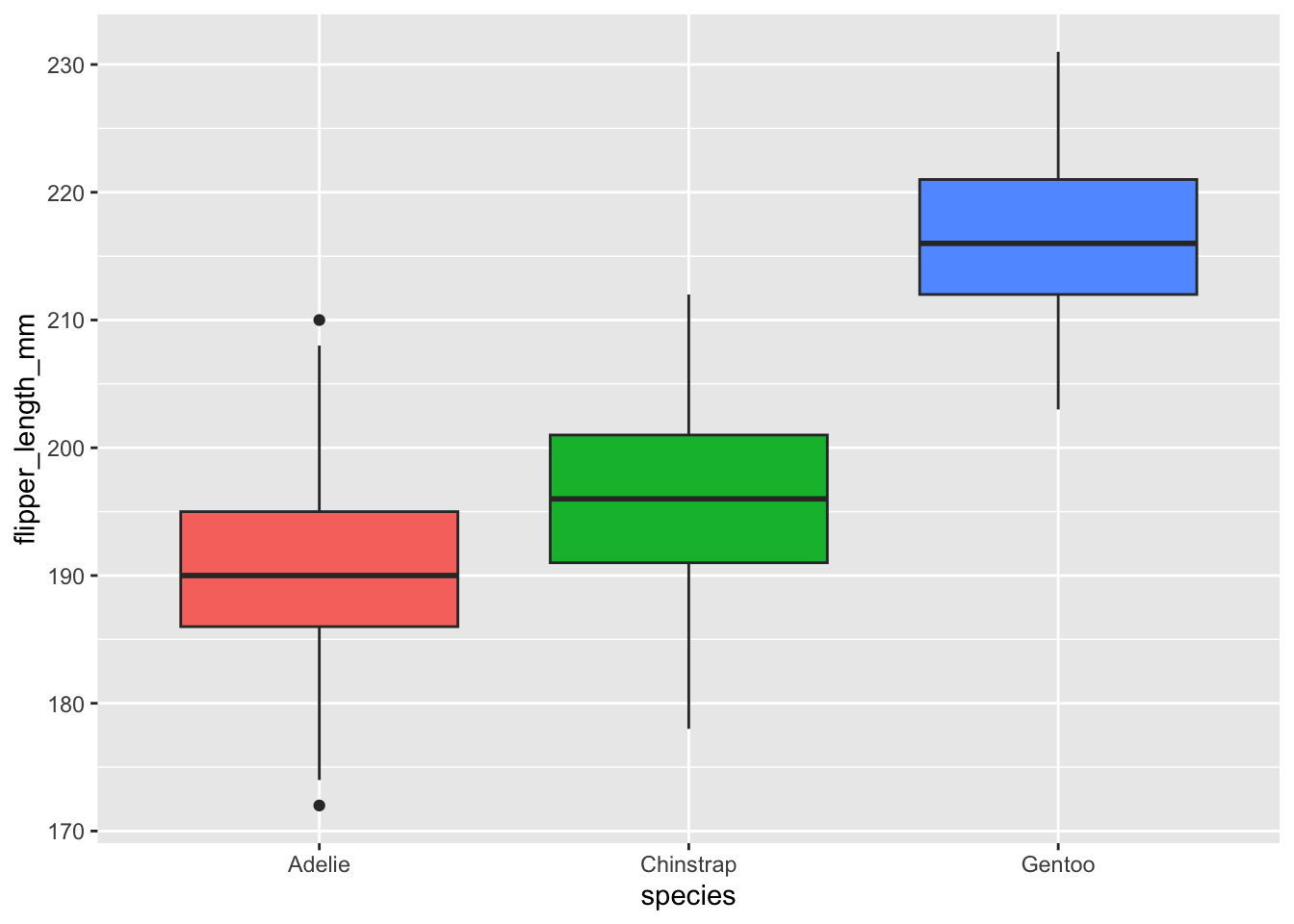 In the context of our example, we are going to use the Kruskal-Wallis test to help us answer the following question: “Is the length of the flippers different between the 3 species of penguins?”.

The null and alternative hypotheses of the Kruskal-Wallis test are:

Second, remember that the Kruskal-Wallis test is a nonparametric test, so the normality assumption is not required. However, the independence assumption still holds.

This means that the data, collected from a representative and randomly selected portion of the total population, should be independent between groups and within each group. The assumption of independence is most often verified based on the design of the experiment and on the good control of experimental conditions rather than via a formal test. If you are still unsure about independence based on the experiment design, ask yourself if one observation is related to another (if one observation has an impact on another) within each group or between the groups themselves. If not, it is most likely that you have independent samples. If observations between samples (forming the different groups to be compared) are dependent (for example, if three measurements have been collected on the same individuals as it is often the case in medical studies when measuring a metric (i) before, (ii) during and (iii) after a treatment), the Friedman test should be preferred in order to take into account the dependency between the samples.

In our example, independence is assumed and we do not need to compare medians (we are only interested in comparing groups), so we can proceed to how to do the test in R. Note that the normality assumption may or may not hold, but for this article we assume it is not satisfied.

The Kruskal-Wallis test in R can be done with the kruskal.test() function:

The most important result in this output is the p-value. We show how to interpret it in the next section.

Based on the Kruskal-Wallis test, we reject the null hypothesis and we conclude that at least one species is different in terms of flippers length (p-value < 0.001).

To know this, we need to use other types of test, referred as post-hoc tests (in Latin, “after this”, so after obtaining statistically significant Kruskal-Wallis results) or multiple pairwise-comparison tests. For the interested reader, a more detailed explanation of post-hoc tests can be found here.

The most common post-hoc tests after a significant Kruskal-Wallis test are:

The Dunn test being the most common one, here is how to do it in R.4

It is the last column (the adjusted p-values, adjusted for multiple comparisons) that is of interest. These p-values should be compared to your desired significance level (usually 5%).

Based on the output, we conclude that:

Therefore, based on the Dunn test, we can now conclude that all 3 species differ in terms of flipper length.

Combination of statistical results and plot

A very good alternative for performing a Kruskal-Wallis and the post-hoc tests in R is with the ggbetweenstats() function from the {ggstatsplot} package: 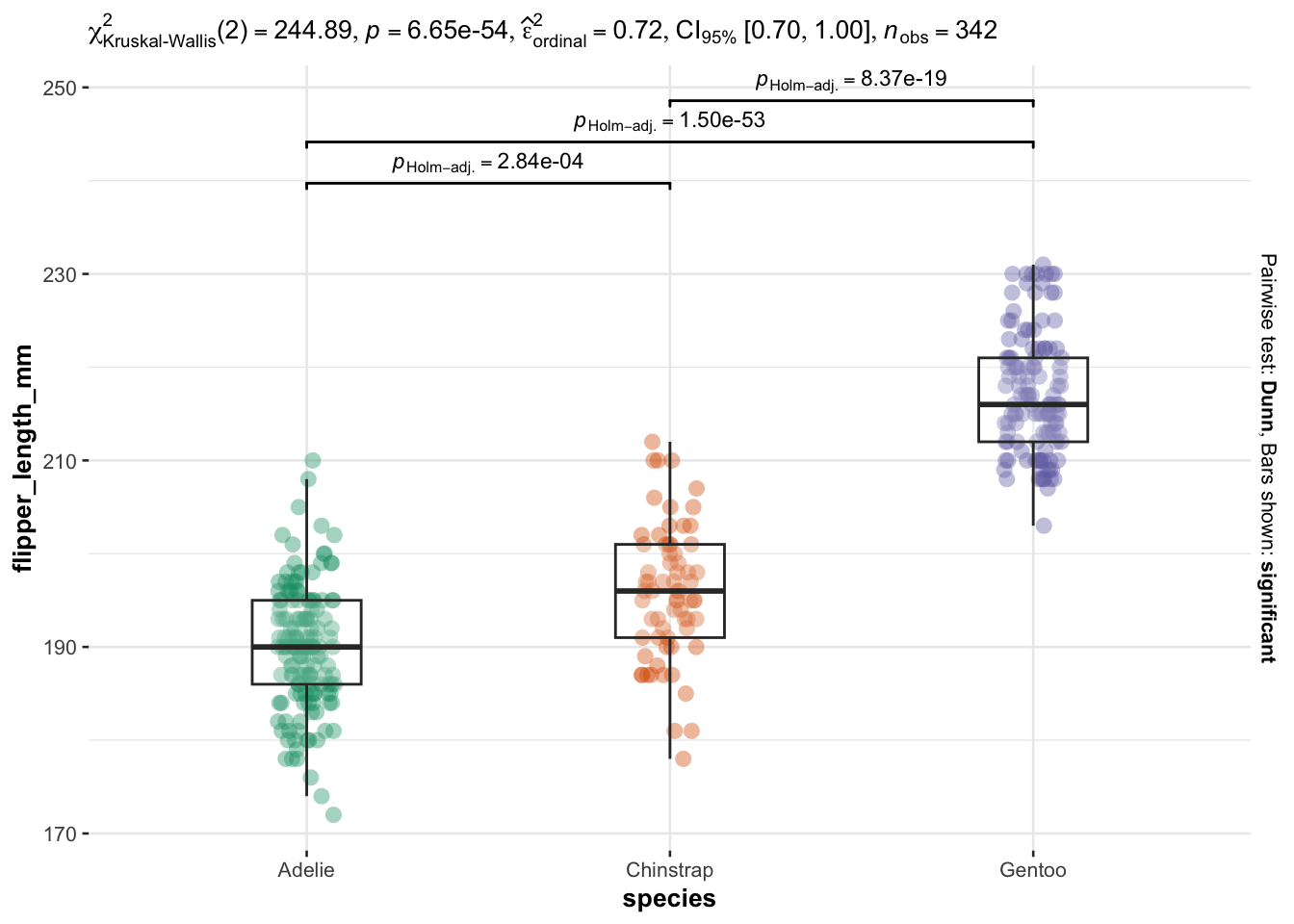 This method has the advantage that all necessary statistical results are displayed directly on the plot.

The results of the Kruskal-Wallis test are shown in the subtitle above the plot (the p-value is after p =). Moreover, the results of the post-hoc test are displayed between each group via accolades, and the boxplots allow to visualize the distribution for each species.

In this post, we reviewed the aim and hypotheses of the Kruskal-Wallis test and its underlying assumptions. We then showed how to do the test in R and how to interpret the results.

We also showed the most common post-hoc test after a significant Kruskal-Wallis test—the Dunn test.

Last but not least, we presented a concise way to present both the data by group and all the statistical results on the same plot.