Chi-square test of independence in R 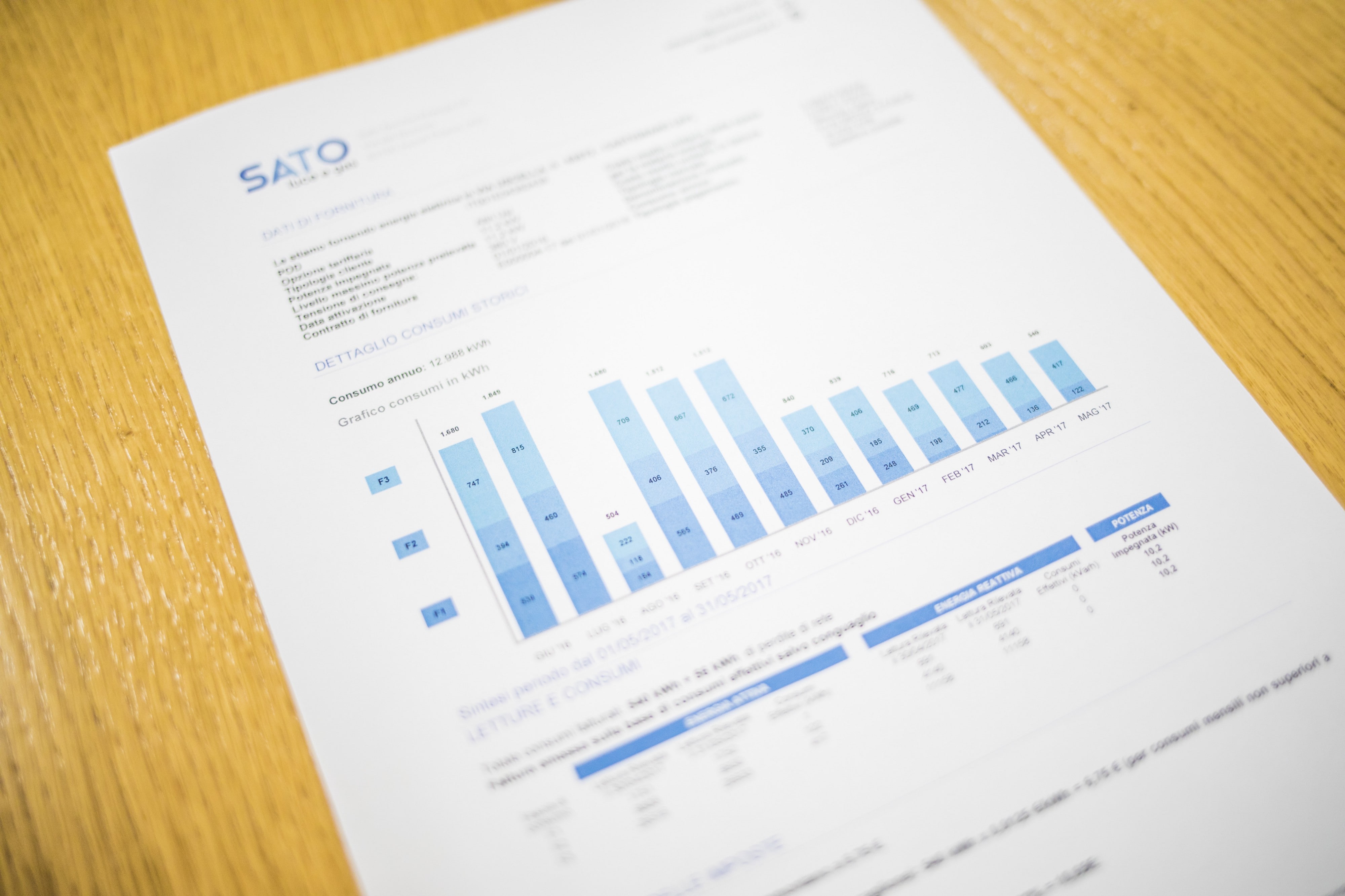 To briefly recap what have been said in that article, the Chi-square test of independence tests whether there is a relationship between two categorical variables. The null and alternative hypotheses are:

For our example, let’s reuse the dataset introduced in the article “Descriptive statistics in R”. This dataset is the well-known iris dataset slightly enhanced. Since there is only one categorical variable and the Chi-square test of independence requires two categorical variables, we add the variable size which corresponds to small if the length of the petal is smaller than the median of all flowers, big otherwise:

We now create a contingency table of the two variables Species and size with the table() function:

The contingency table gives the observed number of cases in each subgroup. For instance, there is only one big setosa flower, while there are 49 small setosa flowers in the dataset.

It is also a good practice to draw a barplot to visually represent the data: 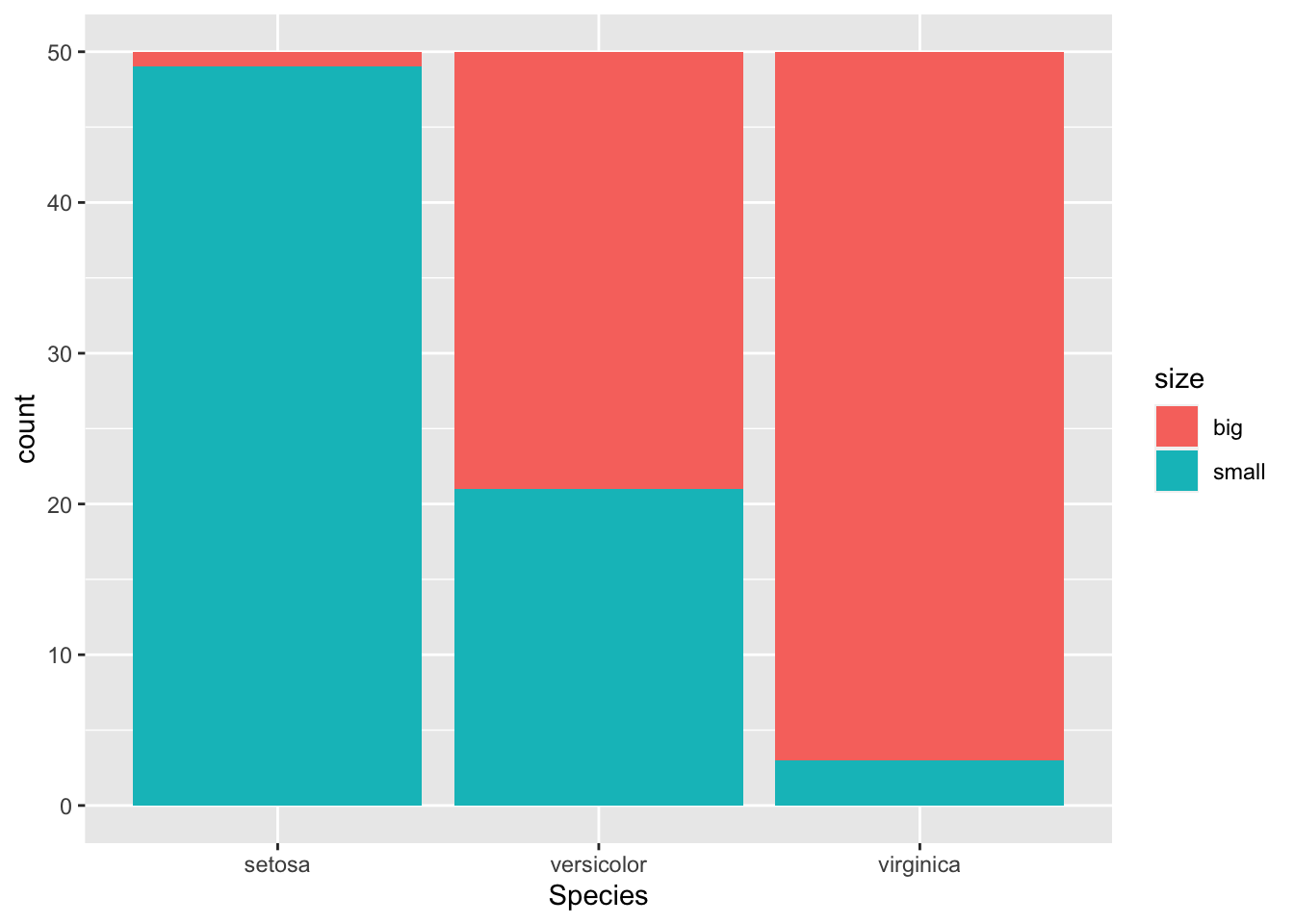 If you prefer to visualize it in terms of proportions (so that bars all have a height of 1, or 100%): 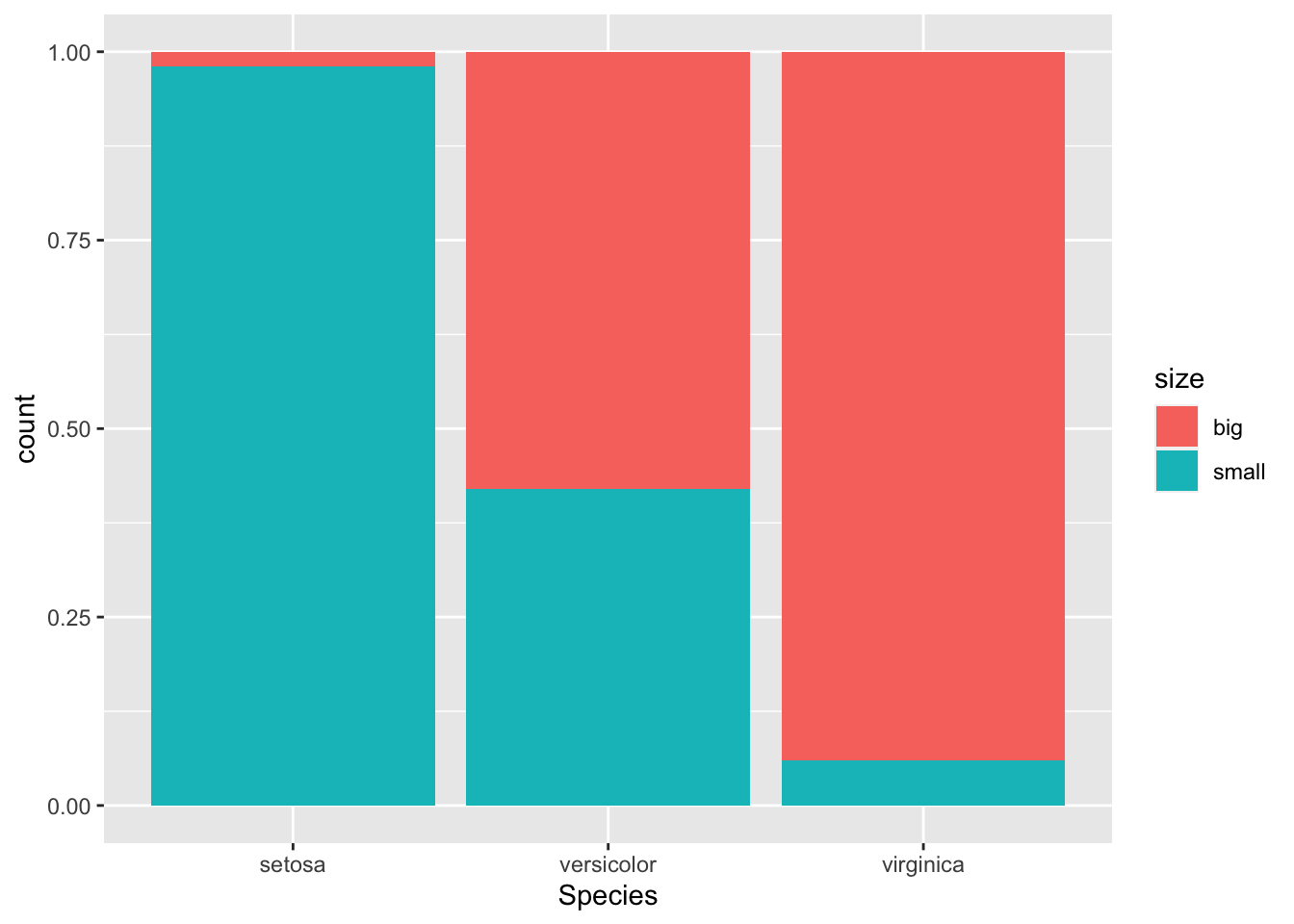 This second barplot is particularly useful if there are a different number of observations in each level of the variable drawn on the \(x\)-axis because it allows to compare the two variables on the same ground.

If you prefer to have the bars next to each other: 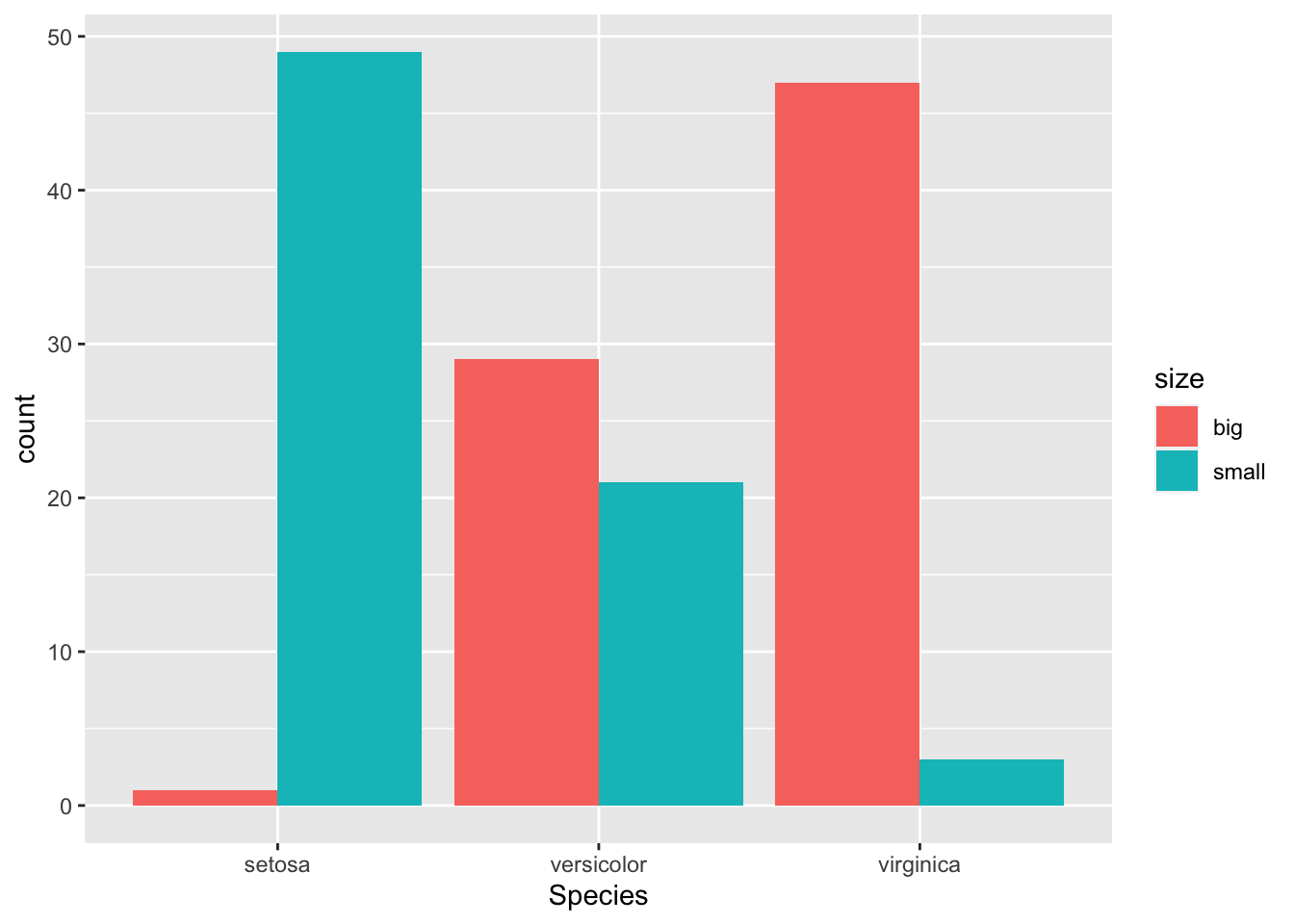 See the article “Graphics in R with ggplot2” to learn how to create this kind of barplot in {ggplot2}.

Chi-square test of independence in R

For this example, we are going to test in R if there is a relationship between the variables Species and size. For this, the chisq.test() function is used:

Everything you need appears in this output:

If you need to find the expected frequencies, use test$expected.

If a warning such as “Chi-squared approximation may be incorrect” appears, it means that the smallest expected frequencies is lower than 5. To avoid this issue, you can either:

The Fisher’s exact test does not require the assumption of a minimum of 5 expected counts in the contingency table. It can be applied in R thanks to the function fisher.test(). This test is similar to the Chi-square test in terms of hypothesis and interpretation of the results. Learn more about this test in this article dedicated to this type of test.

Talking about assumptions, the Chi-square test of independence requires that the observations are independent. This is usually not tested formally, but rather verified based on the design of the experiment and on the good control of experimental conditions. If you are not sure, ask yourself if one observation is related to another (if one observation has an impact on another). If not, it is most likely that you have independent observations.

For your information, there are three other methods to perform the Chi-square test of independence in R:

As you can see all four methods give the same results.

If you do not have the same p-values with your data across the different methods, make sure to add the correct = FALSE argument in the chisq.test() function to prevent from applying the Yate’s continuity correction, which is applied by default in this method.1

\(\Rightarrow\) In our context, rejecting the null hypothesis for the Chi-square test of independence means that there is a significant relationship between the species and the size. Therefore, knowing the value of one variable helps to predict the value of the other variable.

Combination of plot and statistical test

I recently discovered the mosaic() function from the {vcd} package. This function has the advantage that it combines a mosaic plot (to visualize a contingency table) and the result of the Chi-square test of independence: 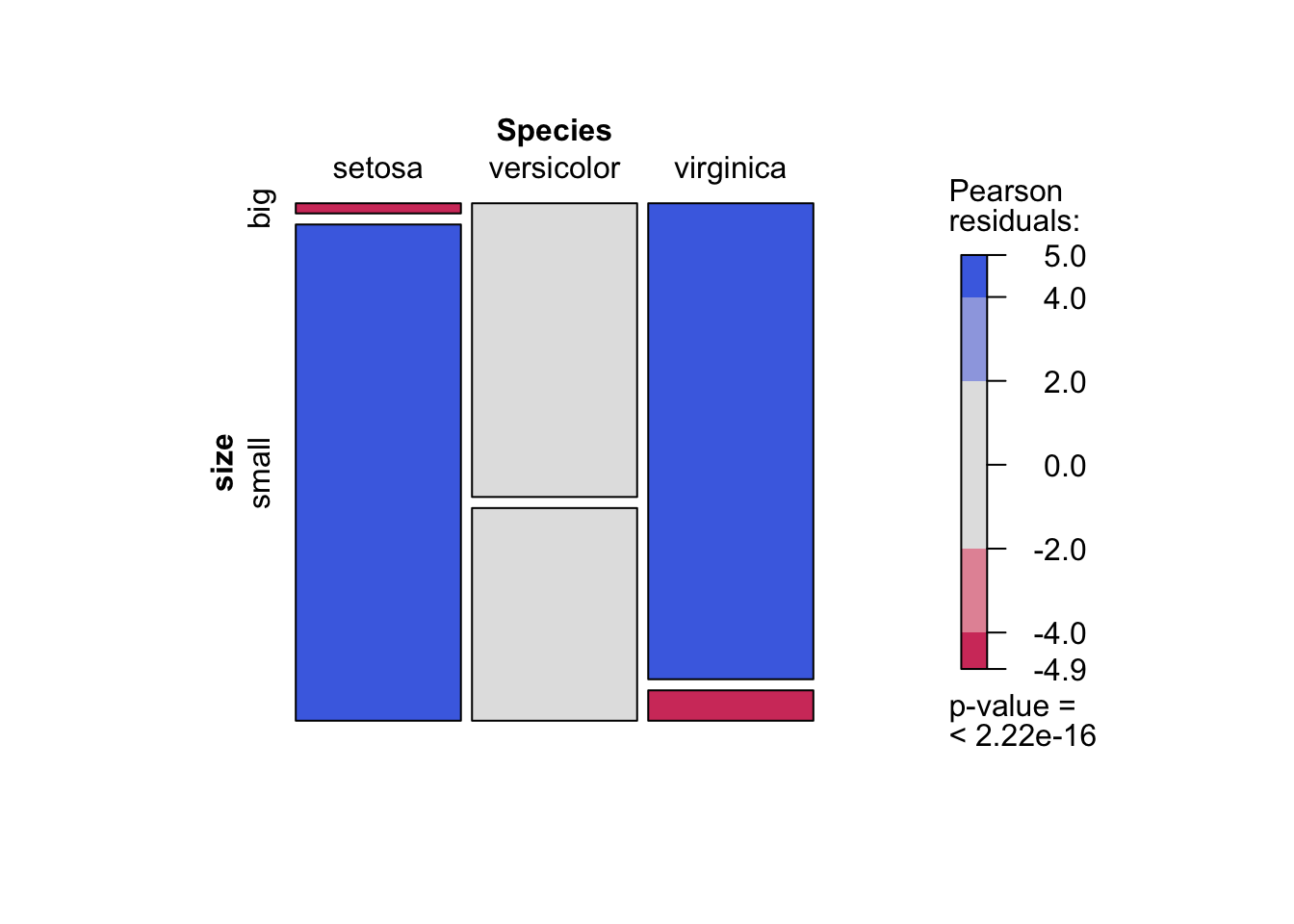 As you can see, the mosaic plot is similar to the barplot presented above, but the p-value of the Chi-square test is also displayed at the bottom right.

An alternative is the ggbarstats() function from the {ggstatsplot} package: 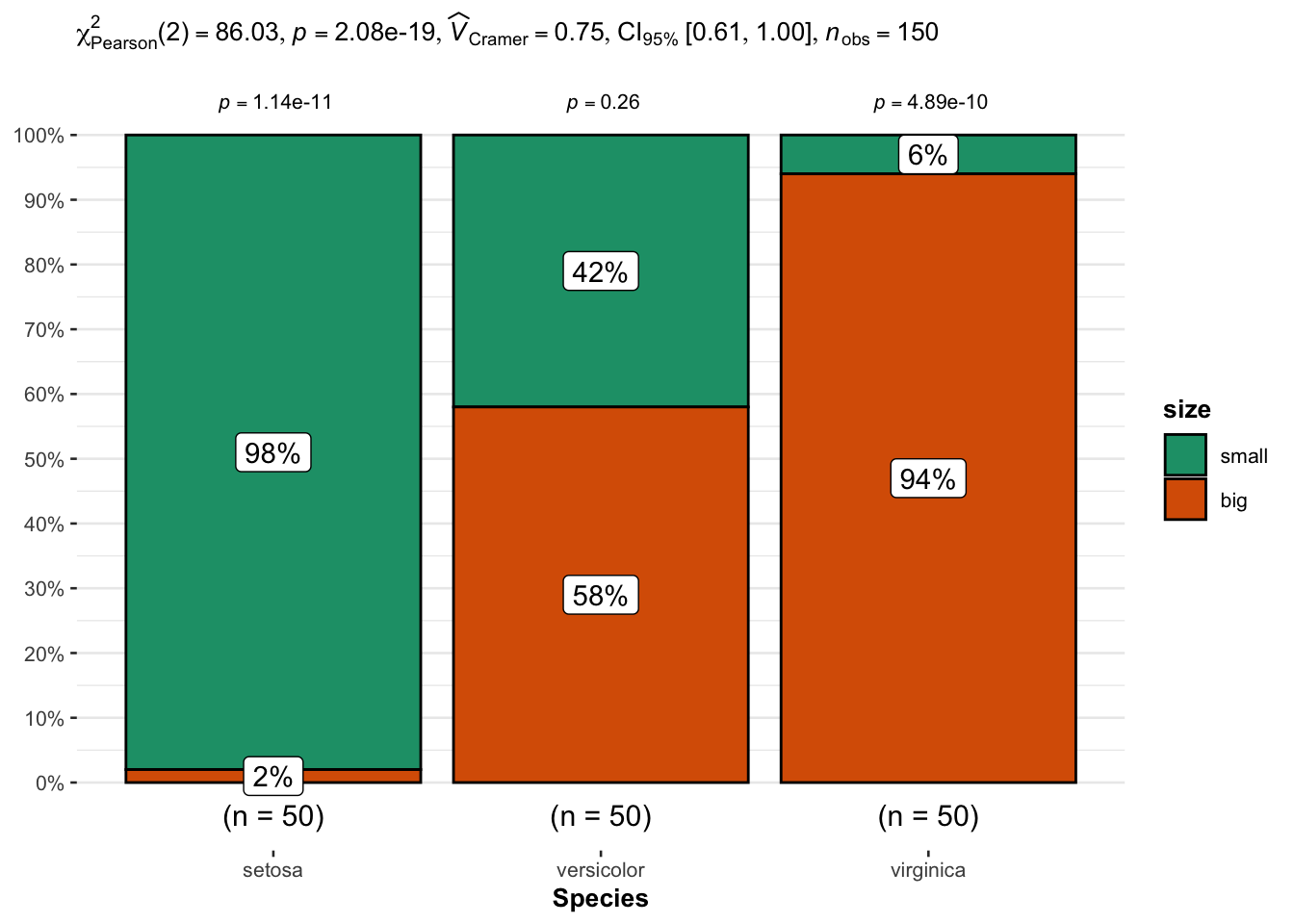 From the plot, it seems that big flowers are more likely to belong to the virginica species, while small flowers tend to belong to the setosa species. Species and size are thus expected to be dependent.

As with the previous tests, we reject the null hypothesis and we conclude that species and size are dependent (\(p\)-value < 0.001).

(Note that this article is available for download on my Gumroad page.)