Correlogram in R: how to highlight the most correlated variables in a dataset 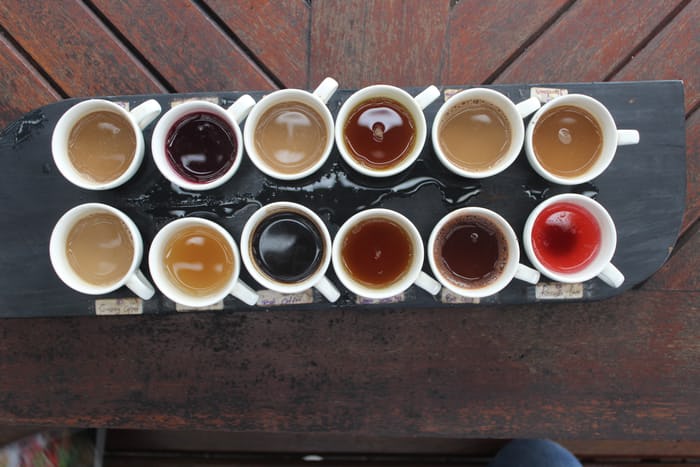 Correlation, often computed as part of descriptive statistics, is a statistical tool used to study the relationship between two variables, that is, whether and how strongly couples of variables are associated.

Correlations are measured between 2 variables at a time. Therefore, for datasets with many variables, computing correlations can become quite cumbersome and time consuming.

A solution to this problem is to compute correlations and display them in a correlation matrix, which shows correlation coefficients for all possible combinations of two variables in the dataset.

For example, below is the correlation matrix for the dataset mtcars (which, as described by the help documentation of R, comprises fuel consumption and 10 aspects of automobile design and performance for 32 automobiles).1 For this article, we include only the continuous variables.

Even after rounding the correlation coefficients to 2 digits, you will conceive that this correlation matrix is not easily and quickly interpretable.

If you are using R Markdown, you can use the pander() function from the {pander} package to make it slightly more readable, but still, we must admit that this table is not optimal when it comes to visualizing correlations between several variables of a dataset, especially for large datasets.

To tackle this issue and make it much more insightful, let’s transform the correlation matrix into a correlation plot. A correlation plot (also referred as a correlogram or corrgram in Friendly (2002)) allows to highlight the variables that are most (positively and negatively) correlated. Below an example with the same dataset presented above: 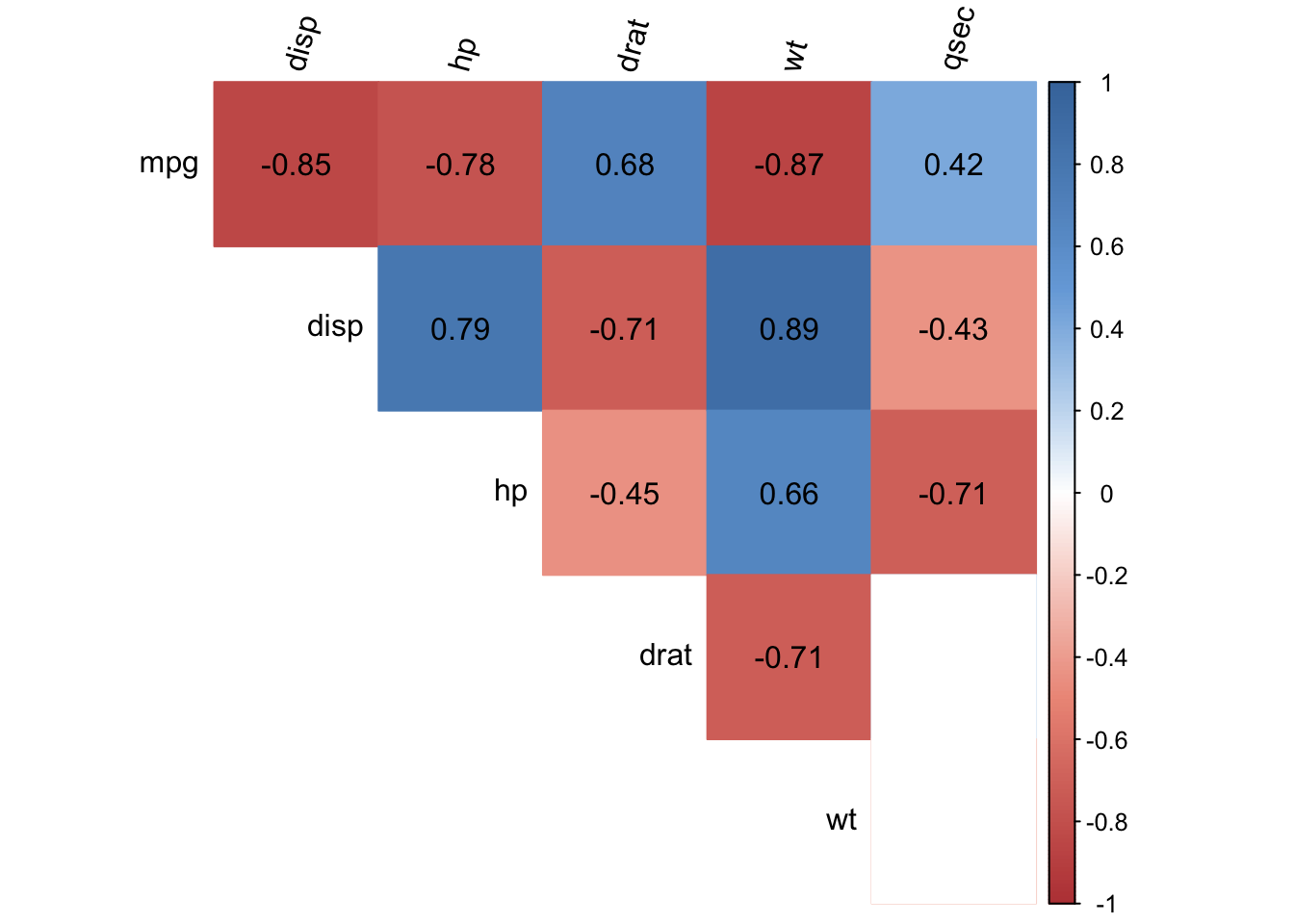 Finally, a white box in the correlogram indicates that the correlation is not significantly different from 0 at the specified significance level (in this example, at \(\alpha = 5\)%) for the couple of variables. A correlation not significantly different from 0 means that there is no linear relationship between the two variables considered in the population (there could be another kind of association, but not linear).

To determine whether a specific correlation coefficient is significantly different from 0, a correlation test has been performed. Remind that the null and alternative hypotheses of this test are:

For those interested to draw this correlogram with their own data, here is the code of the function I adapted based on the corrplot() function from the {corrplot} package (thanks again to all contributors of this package):

The main arguments in the corrplot2() function are the following:

You can also play with the arguments of the corrplot2 function and see the results thanks to this R Shiny app.

An alternative to the correlogram presented above is possible with the ggcorrmat() function from the {ggstatsplot} package: 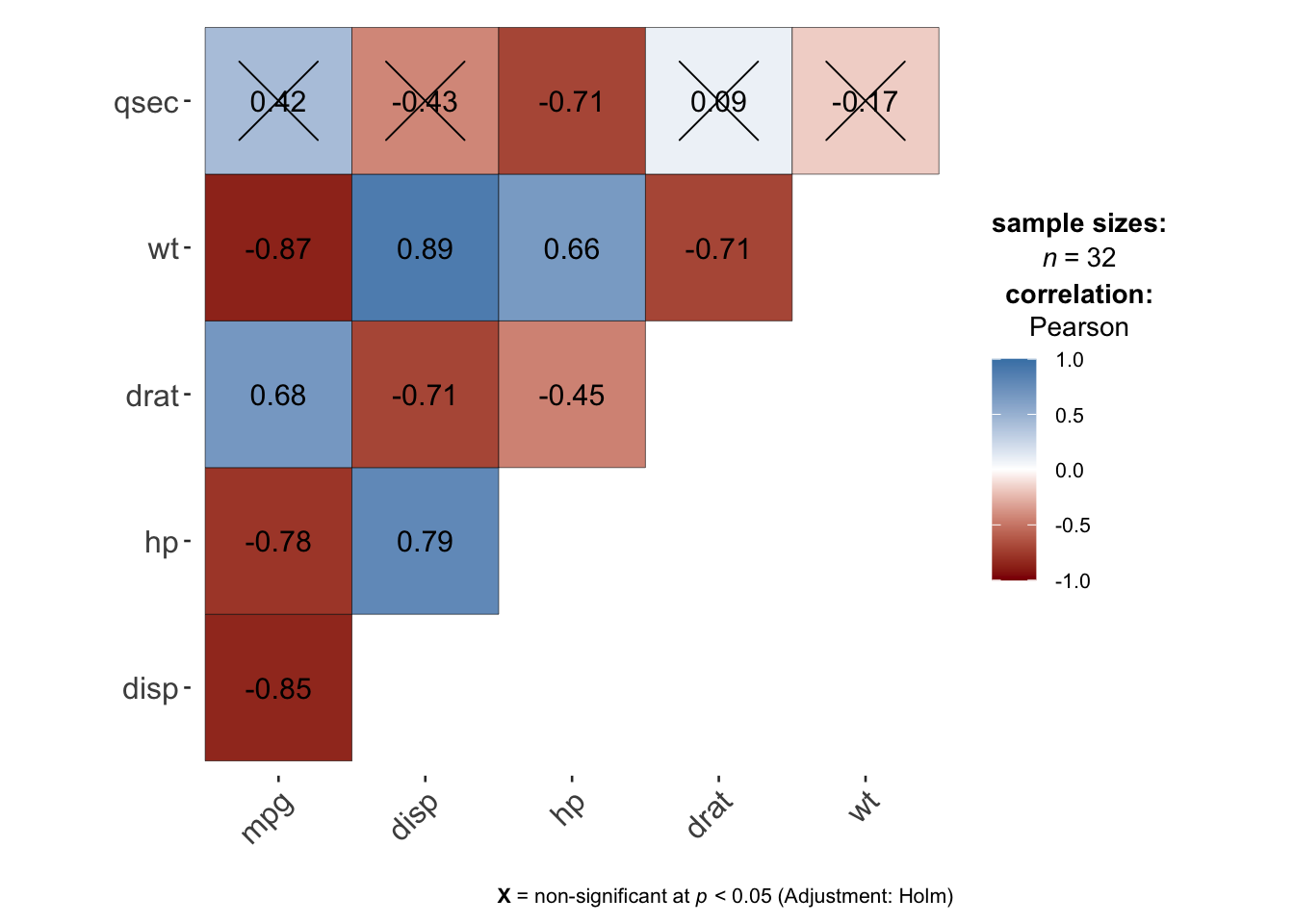 In this correlogram, the non-significant correlations (by default at the 5% significance level with the Holm adjustment method) are shown by a cross on the correlation coefficients.

The advantage of this alternative compared to the previous one is that it is directly available within a package, so you do not need to run the code of the function first in order to draw the correlogram.

Thanks to this article, I discovered the {lares} package which has really nice features regarding plotting correlations. Another advantage of this package is that it can be used to compute correlations with numerical, logical, categorical and date variables.

See more information about the package in this article.

Use the corr_cross() function if you want to compute all correlations and return the highest and significant ones in a plot: 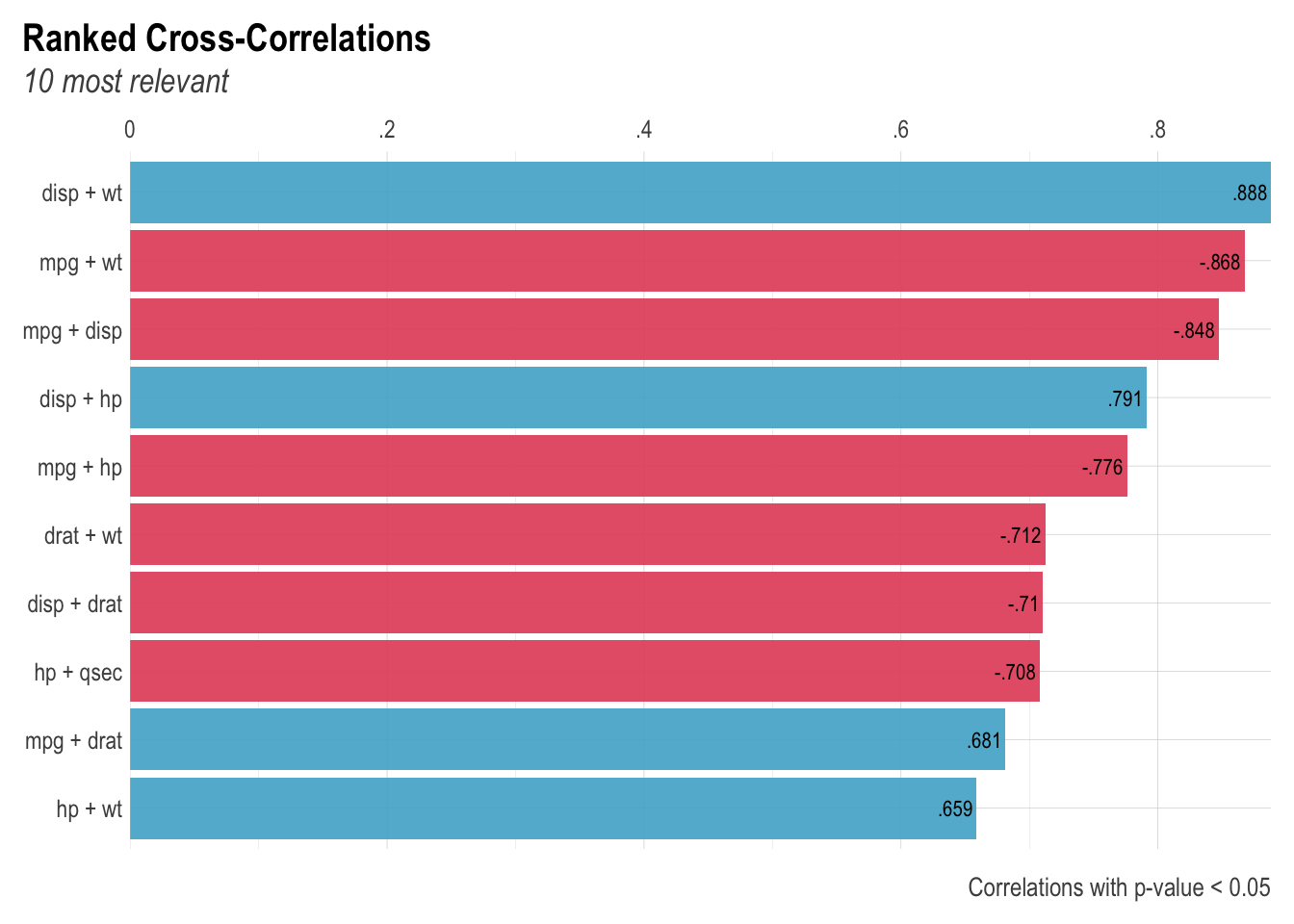 Correlation of one variable against all others

Use the corr_var() function if you want to focus on the correlation of one variable against all others, and return the highest ones in a plot: 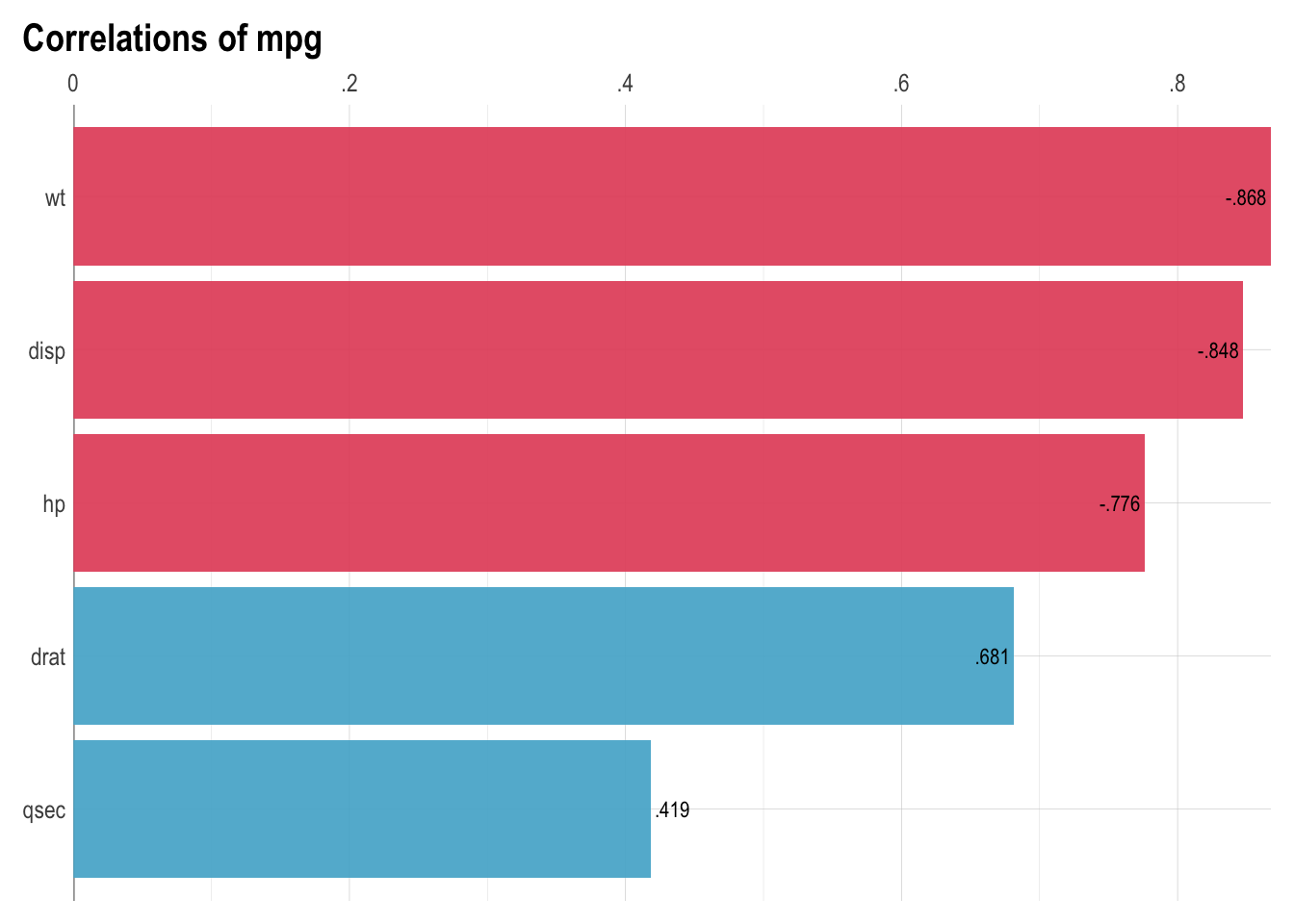 Thanks for reading. I hope this article will help you to visualize correlations between variables in a dataset and to make correlation matrices more insightful and more appealing. If you want to learn more about this topic, see how to compute correlations coefficients and correlation tests in R.